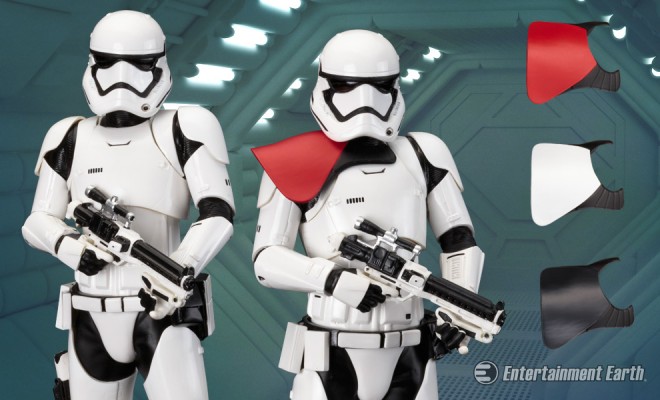 Star Wars ArtFX+ statues bring you all of the quality and detailing that you expect from an ArtFX release in a great smaller scale, perfect for collecting!

The Saga Collection has been highlighting the cool characters from the classic films, and now the line is expanding yet again to include all of the heroes and villains from the new films starting with Star Wars – Episode VII: The Force Awakens.

The armored fist of the Imperial First Order, the Stormtrooper carries on the legacy of the soldiers seen in previous films with newly updated white armor and a sleek blaster at the ready. Fighting against the Rebellion three decades after the Battle of Endor and the death of Emperor Palpatine, the First Order Stormtrooper 1:10 Scale ArtFX+ Statue is highly detailed and features a beautifully stark black and white color scheme that will stand out in your collection. The trooper even comes with three different shoulder pauldrons (black, white, and red) so you can customize your display!

Kotobukiya’s ArtFX+ Statues are fun-to-assemble and pre-painted kits that can be put together easily in seconds without glue or modeling skill. The First Order Stormtrooper stands just over 7-inches tall (1/10th scale) with magnets in his feet for extra stability on the included metal display base.

Collect an army of Stormtroopers and don’t forget the previously released Captain Phasma ArtFX+ Statue to lead them! Pre-Order today at Entertainment Earth!