Now, under Disney Publishing Worldwide, Star Wars is making its way back to Marvel Comics. Next Wednesday, January 14th, the first issue of Star Wars #1 will debut and we have a sneak peek at it which you can check out below!

“Luke Skywalker and the ragtag band of rebels fighting against the Galactic Empire are fresh off their biggest victory yet-the destruction of the massive battle station known as the Death Star. But the Empire’s not toppled yet! Join Luke along with Princess Leia, smugglers Han Solo and Chewbacca, droids C-3PO and R2-D2 and the rest of the Rebel Alliance as they strike out for freedom against the evil forces of Darth Vader and his master, the Emperor. Written by Jason Aaron (Original Sin, Thor: God of Thunder) and with art by John Cassaday (Astonishing X-Men, Uncanny Avengers), this is the Star Wars saga as only Marvel Comics could make it!”

Dan Buckley, Marvel Worldwide Publisher and President, said they “could not be more excited to continue the publication of Star Wars comic books and graphic novels.”

There’s no news yet on whether or not the Marvel universe and Star Wars universe will have a crossover but we think it’s unlikely at this point. Still, a new Star Wars comic series is very exciting! It’s great how many new things we’re getting with companies like Disney, Marvel, and LucasFilm all coming together.

Are you excited for Star Wars #1? What would you like to see between a Marvel and Star Wars crossover if it ever happened? Let us know in the comments!

Check out the first pages of Star Wars #1 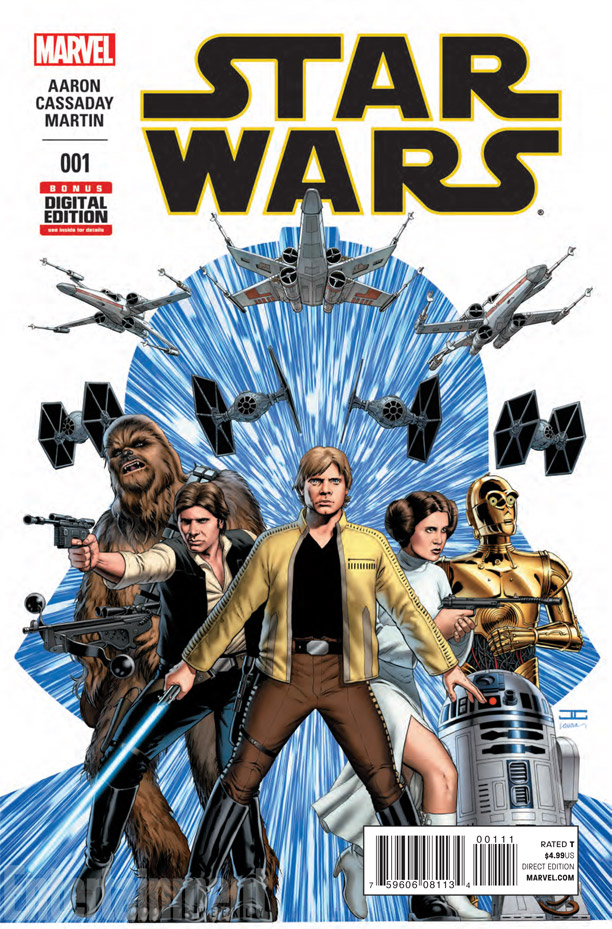