If you haven’t seen the Pin Mate™ wooden collectible line from Bif Bang Pow!, it’s just going to be a matter of time before you do. They are one of the simplest and coolest ways to enjoy your favorite characters emerging onto today’s market. With the retro design and classic attitude, this is the toy for collectors who want an under spoken, unique tone to their collection.

Most recently, the Pin Mate™ line has plans to expand with its very first stackable Marvel Pin Mate diorama set, created exclusively for San Diego Comic-Con! A prize that will be sought after once the limited-edition has sold out, The Spider-Man Pin Mate Wood Glider Set with Spider-Man and Green Goblin – Convention Exclusive sets the stage for a classic scene like never before.

Spidey battles his foe, Green Goblin, who rides his wooden glider across a highly stylized wooden New York city diorama. Made to the same exacting standards of other Pin Mate figures and playsets, this exclusive set is eye-catching, dynamic, and classic. Each retro-styled figure stands 2-inches tall with highly-detailed, brightly colored, 360-degree artwork. 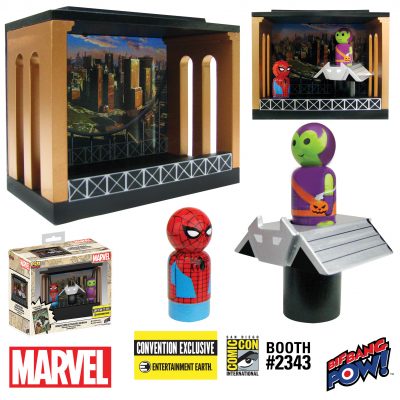 Spider-Man is #11 in the Marvel Pin Mate series, and Green Goblin is lucky #13. But the number you’re going to want to remember is 1,000. That’s because there are only 1,000 pieces of these individually numbered sets planned. And where do you need to go to get them? Entertainment Earth 2343 booth at this year’s San Diego Comic-Con! Available only while supplies last!

The first opportunity fans can grab this individually numbered and limited-edition exclusive will be at San Diego Comic-Con on July 20, 2017 in the Entertainment Earth booth (#2343)!