If you were lucky enough to play with toys back in the 80’s, you’ve got to be thrilled about the retro-action that is available these days. If you weren’t lucky enough, you’re lucky to be alive right now. Take a look at the toyscape out there. There are so many cool things to buy, to play with, and to collect. 2016 has the coolest toys in history. Granted, this is mostly because 2016 has a firm grip on the toys from the 1980’s! Yes, the golden age of action figures is back, in a big way.

The coolest way to collect modern, retro-figures is to get them mashed together. Two of the most original and inspired toy lines of the 80’s are put together with the Masters of the Universe M.U.S.C.L.E. figures. Now, you can collect this amazing hybrid toy in a brand new – and exclusive – way, with the Super 7 MOTU M.U.S.C.L.E Mini-Figure Yellow 24-Pack Convention Exclusive!

Picking up a huge 24-pack of M.U.S.C.L.E. figures was a rare treat in the 80’s, usually reserved for birthdays or gifts from Santa. Recalling all the glory and excitement of that moment—holding that huge rectangular box in your hands – you can know that things are better than ever with the characters from Masters of the Universe!

Collectors of every kind will be yellow with envy when they see that you’ve added this bunch to your list. There are two versions of He-Man, two versions of Skeletor, a mini Castle Grayskull, Kobra Khan, Spikor, Battle Cat, The Sorceress, Man-At-Arms, Teela, Mer-Man, Tri-Klops, Buzz-Off, Whiplash, Orko, Beast Man, Man-E-Faces, Trapjaw, and others. Now, if that cast of characters doesn’t get you excited, I just can’t help you.

This are the most epic characters of the 80’s presented in the most exciting miniature form that toys have ever taken in a color that you won’t find anyone else. All 24 characters from series 1 and 2 are here. Each 1 3/4-inch figure is intricate with details and ready to add a colorful touch to your collection. You won’t find this set anywhere else, so order today from Entertainment Earth! 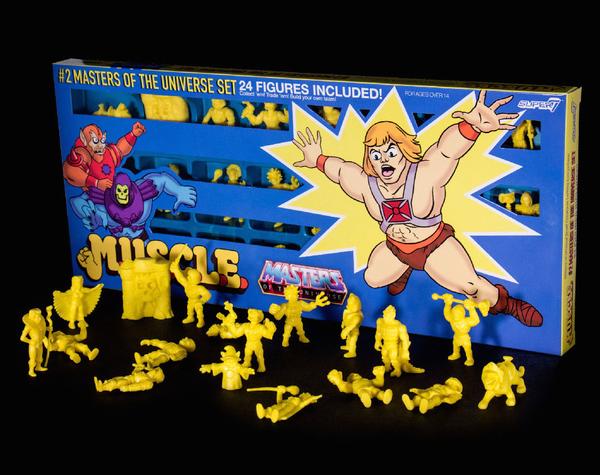