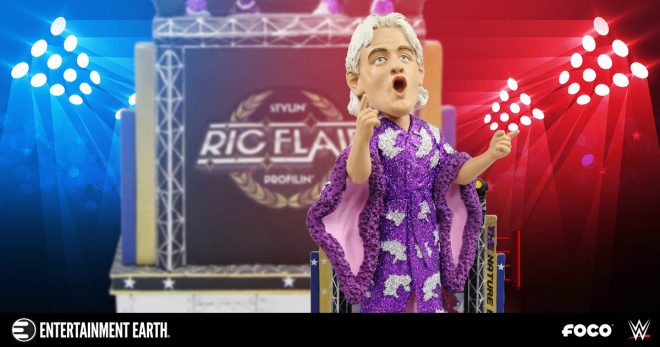 A wise man once said, “to be the man, you’ve got to beat the man,” but today you can own the man. One of wrestling’s greatest living legends, Ric Flair, is a 16-time world champion and two-time WWE Hall of Famer. He’s arguably the best wrestler to ever step in the squared circle. Not only could he make you laugh, make you angry, and make you riot with his words, but he was one of the better wrestling talents. He inspired an entire generation of wrestlers in the business and his effect on sports entertainment will be felt for years. Now is your chance to take a piece of The Nature Boy home with you! 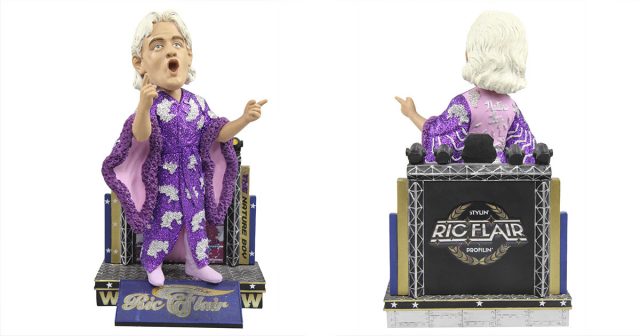 The WWE Ric Flair Resin Bobble Head is a must-have for any self-respecting wrestling fan. Whether you’re a hardcore fan or just a casual fan, Ric Flair belongs on your Mount Rushmore of wrestlers, and this bobble head belongs on your mantle. Perfectly sculpted and given a bit of an animated feel, the bobble head stands at about 8-inches tall. This bobble head gives off the luxuriousness that Flair is known for – painted in one of his classic dark purple robe from the 1990s with an added sparkle from glitter.

Grab yours today and you’ll be stylin’, profilin’, limousine ridin’, jet flyin’, kiss-stealin’, wheelin’ n’ dealin’ in no time. You’ll want to scream out your best “WOO” every time you walk past bobbling Ric Flair. Get yours just in time for WrestleMania season and don’t find yourself tapping out when this Foco Bobble Head sells out… for good! And remember, diamonds are forever and so is Ric Flair.