It’s a great time to be a Star Wars fan! With the upcoming new installment of the epic space saga, Star Wars: The Last Jedi, just around the corner, we are ready to start adding some new pieces to our collections. Luckily, Force Friday II brought some brand new releases that you won’t want to miss out on. Here are the top five most popular on Entertainment Earth:

At the top of the list, we have the Star Wars The Black Series 6-Inch Action Figure Wave 12 Case. This case brings us some brand new additions to the toy line including Grand Admiral Thrawn and Hera Syndulla. This case also includes 2 Darth Vader figures, a Kylo Ren figure, a Rey figure, a First Order Stormtrooper figure and an old Jedi Master version of Luke Skywalker. Each come with their own accessories and are intricately detailed. By getting this case you can easily add a bunch of new characters to your collection all at once.

The Wave 13 case is available this month and includes, even more, new releases. It’s a great case because there are eight different figures that you’ll want to add to your collection. Included are some great villainous characters including an AT-AT Driver, a Snowtrooper, and Elite Praetorian Guard. Even better are the heroes! You’ll get Finn disguised as a First Order officer, Poe Dameron, General Leia Organa, and Maz Kanata with a chest accessory to recreate when Rey finds Luke’s lightsaber. This is a great case with available for pre-order now and one that will surely sell out fast! 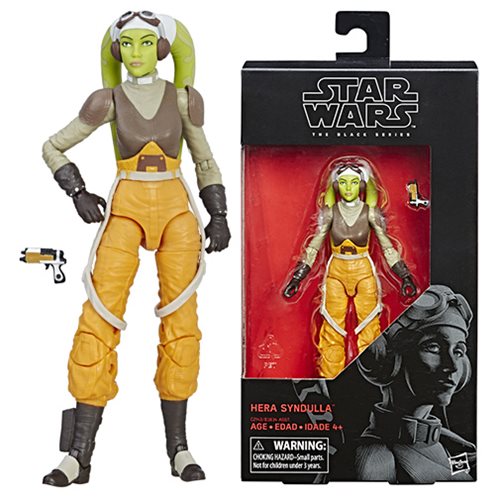 If you are looking to collection individual action figures, the Hera Syndulla 6-inch action figure comes out this month as well. Hera is a Twi’lek pilot that is ready to fight for the Rebellion at any cost. She first appeared in a Star Wars Rebels short, The Machine in the Ghost, to promote the hit animated television show. This action figure is a detailed rendition of the animated character that definitely deserves to be a part of the pivotal The Black Series action figure line. She comes with her trusty blaster to recreate all of your favorite scenes from the show.

The last addition to the 6-inch Black Series action figure line is this fantastic Luke Skywalker’s Landspeeder Vehicle with Luke Skywalker Action Figure Deluxe Set! Previous deluxe sets have been amazing and this one looks like it won’t disappoint. Luke’s X34 Landspeeder is movie accurate showing off some spectacular details. Even better is the Star Wars: A New Hope version of Luke Skywalker included with quite a few accessories. Included are macrobinoculars, a lightsaber hilt, a slugthrower rifle, and the hat and goggles shown in the deleted scenes of the original film. Put all of this together with the clear stand to have his Landspeeder float and you will be able to recreate some of the best scenes from the film that started it all!

Finally, in stock now is the Wave 1 set of these small The Last Jedi Orange 3 3/4-Inch Action Figures. These have to be my favorite new figures out now because they come to life when coupled with Force Link gear. Force Link is a piece you wear that lights up, plays dialogue and sounds from whatever action figure it comes into contact with. It comes in the starter set and is super cool! In this new Wave 1 set you can bring your favorite heroes and villains to life including Kylo Ren, a First Order Stormtrooper, Rey, Poe Dameron, Finn, and Old Jedi Luke Skywalker. I can’t wait to get my hands on these to see what scenes I can create from the upcoming installment of The Last Jedi!