Force Friday II has become a calling for toy makers across the land to show up with their latest and greatest Star Wars collectibles. Obviously, big companies like Funko are no exception to that rule. This year they really brought it with their Star Wars: The Last Jedi line-up, bringing in an array of popular new figures. 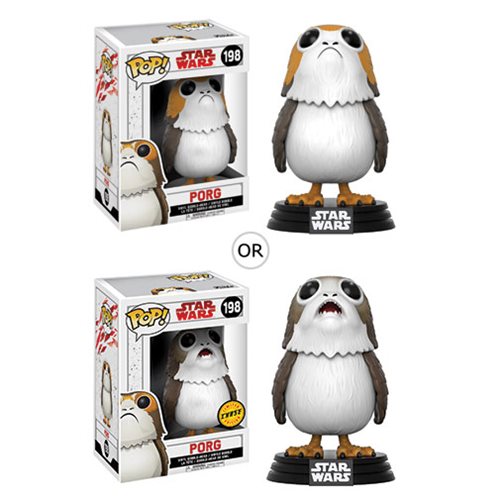 The porg, like BB-8, won the hearts of fans immediately. You can now find them all over the internet in various arrays of gifs, shorts, stills, and more. There was obviously no way Funko was going to ignore that fad, and you know you need a porg bobblehead occupying your desk at work. Think of it. You could have your own, wibbly wobbly, porg army.

Rey’s got new digs going into the next film, so obviously we need another figure of her. More importantly than the new outfit, Rey is sporting her light saber in this one! She still doesn’t need you to hold her hand, but she’s happy to accompany you on any adventure you need.

This Luke figure is so true to screen that it’s as silent as he was in Star Wars: The Force Awakens! How’s that for accuracy? He’s tossed the hood and looks like maybe he’s grooming himself now that there’s another human on his remote island.

You know you’ve always wanted a figure of Snoke rocking Ric Flair’s old robes. The Nature Boy probably wore ’em a bit better, but hey, those flashy robes really distract from the giant crater in his face. What’s goin’ on there, buddy? Who hurt you? Is that why you’re so cranky?

There must always be balance in the Force. It stands to reason that your favorite ball droid has an evil brother or two. BB-9E’s every Empire lover’s dream, but can he out-sass his bright orange counterpart? Funko’s may not make noise, but we think your imagination is up to the task. Besides, your Empire Funkos need a friend!