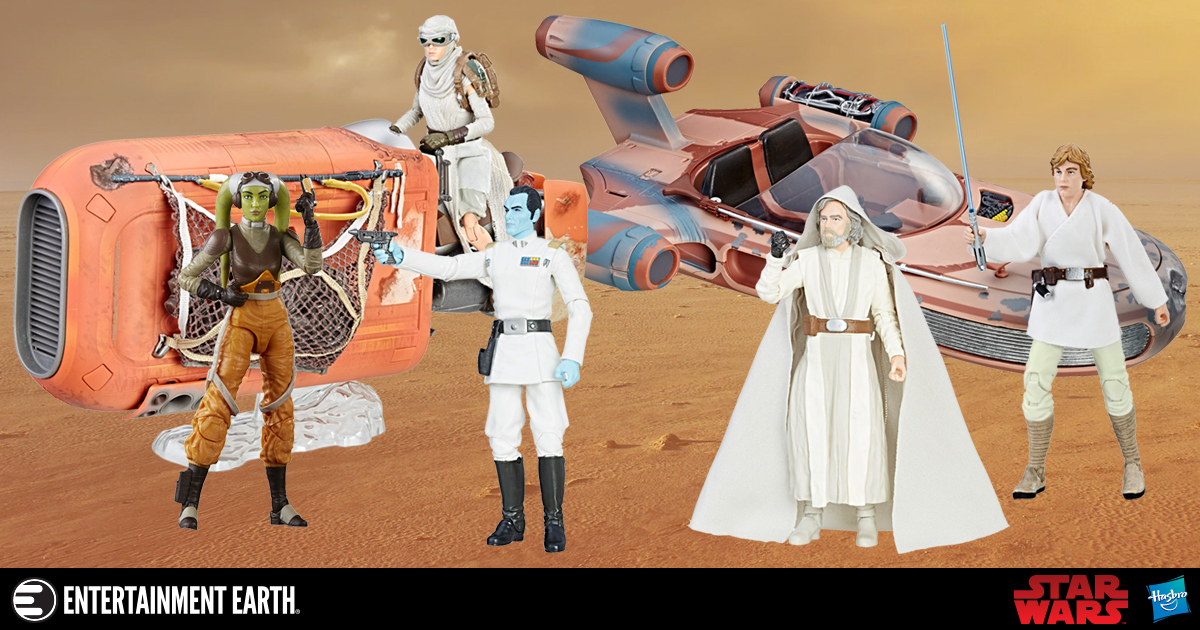 Force Friday II has become a highly-anticipated yearly event for Star Wars fans and with good reason. Some really awesome collectibles hit shelves, and this year’s bunch is no exception. We already took a look at the most popular collectibles from Force Friday 2017, so let’s take a deeper dive into the hot Hasbro The Black Series 6-Inch Figures and Vehicles that were released.

Flashing back to the original adventure that started it all, the Luke Skywalker’s Landspeeder Vehicle could have zoomed straight off the screen. The low-riding hovercraft is dented, pock-marked, and discolored with rust after years spent in the punishing desert of Tatooine. Included is a Luke Skywalker action figure clad in his original white clothes and beige boots. He comes with multiple points of articulation, a lightsaber, his space poncho, a hat and goggles, and a clear stand for his speeder.

One of the most popular characters from the animated Rebels series, Hera Syndulla is wearing her pilot fatigues and comes with a handy blaster. She stands 6-inches tall and is highly poseable with articulated knees, feet, and elbows.

Rey’s Speeder Vehicle may look clunky, but it’s a dependable machine. Which is especially important when you’re a scavenger like Rey, forced to go deeper and deeper into the wastelands of Jakku in search of any parts that will put food on the table. Rey’s speeder has a removable panel to expose the engine beneath and comes with a clear plastic stand. A Rey figure is included, depicting the heroine as we first see her in her full head wrap and goggles, a bag on her back and her handy staff in hand.

Everyone’s favorite blue-skinned, jack-booted villain Grand Admiral Thrawn has been a hit ever seen he appeared in the Extended Universe. Now, thanks to a recent novel, he’s officially part of the Star Wars canon again! Celebrate with this 6-inch tall action figure of the Empire’s greatest military genius. Thrawn is dressed in his signature white uniform and comes with a wicked blaster.

Last – but certainly not least – is Luke Skywalker as seen in The Last Jedi. The former boyish Rebel hero has grown old and weary over the decades, fading into myth and legend thanks to his long, self-imposed exile. (Hopefully, he’ll find a reason to return to the good fight after training Rey.) Luke stands 6-inches tall and comes with a sweeping beige cloak that Obi-Wan would approve of. His robotic hand is on display, the synthetic outer skin is worn away.

Whether you’re a Rebel or on the side of the evil Empire, these The Black Series figures have you covered!