Dance Your Cares Away with These Fraggle Rock Funko Pop! Figures

Revisit the wondrous world of Fraggle Rock with these fun vinyl figures. That’s right – Jim Henson’s lovable creations/creatures are finally here in Funko form. This set of Fraggle Rock Pop! Vinyl Figures will feature the five main Fraggle characters. Plus, each figure will come packed with their very own Doozer.

As the bravest Fraggle, Gobo is always up for a new adventure. Gobo’s willingness to explore and level-headedness make him a natural leader, even though he can sometimes be a little too full of himself. With his furry tail and bright purple hair, there’s no mistaking this fun Fraggle. He even comes holding his own postcard. 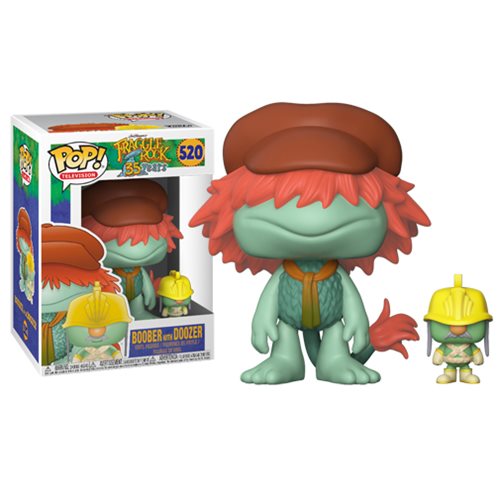 There are only two things Boober really cares about: cooking and laundry. Referred to as the smartest Fraggle, Boober can sometimes be a little too smart – often finding himself in situations where he doesn’t belong. His messy red hair is hidden by his cute brown cap, and his signature scarf helps him stand out among the other Fraggles.

Considered the fastest and most athletic Fraggle in the rock, Red prides herself on being the greatest swimmer around. Her sporty pigtails and bubbly smile show she’s always ready for a new adventure. Like Gobo, Red sees herself as an authority figure, with the two often butting heads over who should be in charge.

As the hippest Fraggle around, Mokey loves to spend her time painting and reading poetry. Because she’s the most optimistic of the bunch, Mokey tries to see the bright side of every situation, even going so far as to irritate the other Fraggles with her excessive cheeriness. Complete with her characteristic bathrobe, purple hair, and pop-top necklace, Mokey’s here to help everyone be a little more chill.

Because he’s the smallest and youngest of the five Fraggles, Wembley’s often bossed around by the older Fraggles. While he’s usually in a good mood, Wembley has a hard time disagreeing with his friends, even when he knows they’re wrong. Never sure what to wear, he comes complete with his signature banana T-shirt.

All five figures will be available in April. While each character is sold separately, they look great as an ensemble. Make sure you pre-order your Fraggles today.