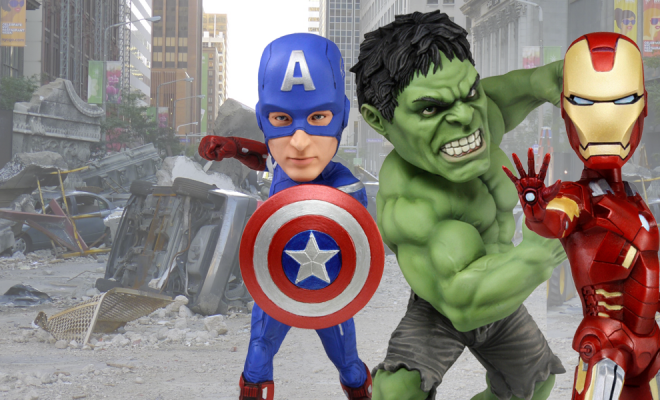 Expand your Avengers collection with these fantastic Avengers Bobble Heads.

The outstanding sculpts showcase each Avenger in character specific poses. The Avengers bobble heads are incredible recreations of the heroes from the hit Marvel film.

The detailed sculpts and meticulous paint application recreate your favorite heroes! These awesome 7 1/2 inch tall Avengers bobble heads want to protect your home or office and make a wonderful addition to any collection.

The patriotic Captain America joins the team as the Captain America Bobble Head in his signature action pose with shield in front. But wait, he seems different than usual. With a larger than usual head that continuously moves, the all-American soldier just has bobble head syndrome. Captain America is just fulfilling his duty to the ever-grateful free folk of the United States of America, and there’s no shame in that.

Witness the Hulk Bobble Head as he intimidates all who look upon him. So fierce is the silent roar the Incredible Hulk is exhibiting, it’s almost too intense to handle. But you’ll like him when he bobbles.

Who canst forget thine mighty Thor Bobble Head? How amusing is it to see a caricature of the Norse God of Thunder with an enlarged head that looks remarkably like Chris Hemsworth? Aye, yet Thor is enraged by thine insolence. But don’t worry, he won’t really exact thunderous justice for his bobbling.

Last, but certainly not least, is the Iron Man Bobble Head. Iron Man becomes exceedingly adorable with bobble syndrome, especially that gigantic head. Standing in a fierce action pose doesn’t negate how cute this caricature is.