In 1980, the dawning of a new decade, a movie debuted and became a fast-growing phenomenon in the horror genre, creating lasting tropes and memorable cinematic moments. This movie was called Friday the 13th, and it was so huge that there has been 11 subsequent films in the franchise. Now, whenever there’s a Friday that happens to coincide with the 13th day of the month, people get crazy. Paranoia over bad luck and superstitions run rampant. But forget all that, we’re here to talk about collectibles based on the beloved hockey mask wearing unkillable foe of the franchise. In honor of today, we’ve put together 13 of the best collectibles from the Friday the 13th franchise, one of which is a brand new Entertainment Earth Exclusive.

NECA brings you a super detailed and horrifyingly accurate figure based on Jason’s look in the fourth movie, The Final Chapter. The figure stands 18-inches tall and has over 25 points of posable articulation. Jason also comes with an enormous amount of accessories including a removable mask, two interchangeable head sculpts, interchangeable hands, knife, machete, and an axe. With those accessories, you can recreate his “fatal” wound by sliding his machete into the side of his head. 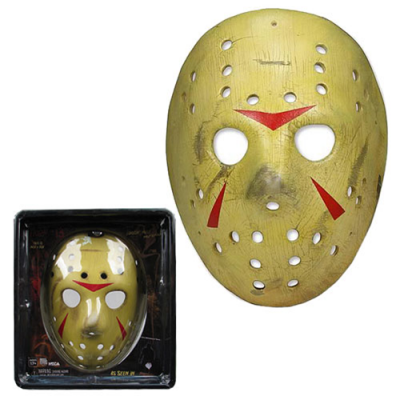 What better item for your display of collectibles than a replica of Jason Voorhees’ original hockey mask? This screen-accurate prop is a replica from Friday the 13th Part III and is guaranteed to be a killer conversation starter around the campfire. This 1:1 scale reproduction of his mask is hand painted and crafted from resin and includes leather-like straps so it can be worn or hung on the wall.

It’s time to bring this adorable teen slasher home with the Mezco Mega-Scale Doll. Jason comes dressed in real cloth clothing replicating his appearance from the third film. The doll features 9 points of articulation and stands 15-inches tall and fully equipped with his camp-killer machete and signature mask. Oh but that’s not all, pop in three batteries and this cuddly version of Jason will be sure to let you know he’s near with that iconic Jason sound.

Jason has used a wide variety of household items to terrify people from the campground to NYC all the way to space including a pickaxe. Well, he’s not the only one who can have fun with this basic mining tool. Bring home this 16-inch movie replica that features details like subtle blood stains on the handle and the movie logo on the axe.

Those creative masterminds at Mezco struck gold again with this one-of-a-kind piece of Friday the 13th merchandise. It’s Jason Voorhees like you’ve never seen him, bursting from a Jack-in-the-Box. It measures about 14-inches tall when popped and the box is a finely detailed tin that encases an intricately detailed sculpt and cloth spring character. The mask is cracked exposing the rotting monster underneath for that gruesome detail you expect.

This figure accessory set is the perfect companion to any of the NECA 7-inch figures. This set comes with the Camp Crystal Lake Sign, dock base, rock and sign base with chain, perfect for recreating those memorable cinematic moments. Pair this set with a Jason Voorhees figure and you can recreate him floating at the bottom of Crystal Lake… before he rises again!

When you think of the perfect collectible of the uber-Jason Voorhees fan, we’ve found it. You can use this mask to cosplay or for Halloween or display proudly in your family room. The mask itself is incredibly detailed but when you remove it you can see the horribly disfigured and decayed face of Mama Voorhees’ baby boy.

Mr. Potato Head played about as equally an important part of our childhoods as Jason Voorhees played in our more advanced years so it makes perfect sense to combine the two, right? Whatever you decide, it doesn’t matter because here it is! Enjoy Fry-Day with the deadliest version of Mr. Potato Head ever.

A lot of collectors have a shelf or two or twenty of sports bobbleheads. Entertaining recreations of their favorite athletes featuring wobbly over-sized heads. Imagine now, next to your Brett Favre or your Michael Jordan bobbles, the MVP of slasher monsters, Jason Voorhees ready to take his shot. This 7-inch bobble is the perfect gift for any collectible fan.

This set is perfect for decorating your lawn for Halloween or Christmas! The set stands about 6-feet tall and includes a blower fan, strings, tether stakes, and an internal light. It’s as easy as plugging in and watching the murderous glow from the beyond. Charm your neighbors by displaying these wonderful decorations proudly on the front lawn. 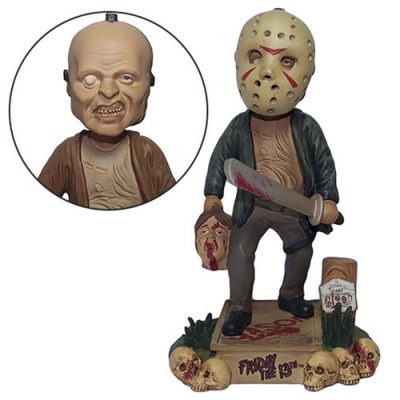 You might be asking yourself, “aren’t two bobbleheads of Jason Voorhees overkill?” Well, you’d be wrong. You can’t have enough wobbly headed serial slashers on your shelves. This version of Jason stands on a pier display base with bloody skulls adorning the sides. He’s also wielding his trusty machete and holding a fresh victim’s decapitated head in his hand, and you can remove his mask if you choose!

What person feels safe in their neighborhood without knowing that their Neighborhood Watch is on patrol? Put up this tin sign and no vandal or thief would dare enter your cul-de-sac. This tin sign measures 8-inches x 11 1/2-inches and poses an intimidating threat to those who would be up to mischief near your home.

Here it is! Entertainment Earth and Mezco bring you a new Exclusive Jason Voorhees figure. This 6-inch figure features 10 points of articulation, his signature bloody axe and machete, and a glow-in-the-dark mask. Jason’s blood-spattered mask can be removed to reveal his signature scarred ace sculpt based on the third film in the series. An alternate left hand is included to help recreate iconic cinematic poses. It would look perfect sitting on a shelf near a window in a cabin by the lake, the mask glowing in the darkness…

With all of these items to choose from, it’s time to make your Friday the 13th a good one without all those pesky superstitions and paranoia over mask wearing, axe-wielding maniacs. Buy yours now, or you might be visited by said maniac looking for some revenge!