The Queens of Sci-Fi Are Now in Pop! Vinyl Form 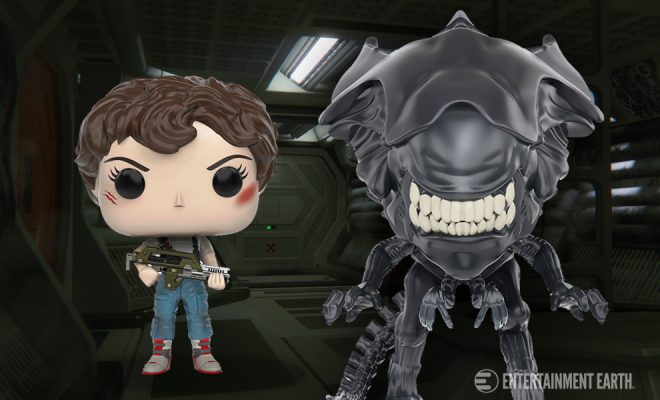 Aliens is perhaps the most beloved film in the Alien franchise. In fact, one of the greatest scenes in movie history is Ripley’s daring rescue of Newt and her subsequent battle with the Alien Queen. Now you can have the two clash whenever you see fit thanks to the Aliens Ellen Ripley and Queen Alien Pop! Vinyl Figures.

Everyone remembers Ripley’s iconic look in this film. From her short, tousled hair to her futuristic Reebok sneakers. She’s dressed for battle and is packing heat with her pulse rifle by her side. Ripley has a few cuts and scrapes on her face, but she’s seen (and survived) much worse. This figure measures approximately 3 3/4-inches tall.

Does anyone else feel bad for Queen A? After all, she traded Newt for the protection of her eggs, and Ripley still burnt them to a crisp! Poor mama, she was just trying to save her babies. No? Just me? Well, whoever’s side you might be on, you can’t deny that this figure is truly magnificent. The Queen shines her pearly whites in a big grin, while her jet black skin covers her giant frame. Her elongated head and extra arms also help this royal maintain her throne. This Pop! Vinyl figure is supersized, measuring approximately 6-inches tall!

Both collectibles come packaged in a window display box. Place your pre-orders now and add these two to your collection come July 2016!