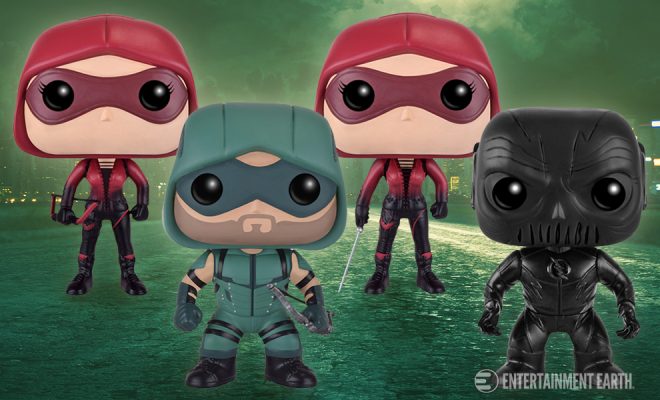 Fresh from Starling City and Central City come the newest additions to the Funko lineup!

Billionaire vigilante Oliver Queen takes on his role as the city’s defender with the Arrow Green Arrow Pop! Vinyl Figure! Featuring Season 4’s distinctive suit and what we’re certain is a menacing gleam in his tiny eyes, he’s ready to take on anything. With his trusty bow at hand, there’s nothing that can stop the Green Arrow!

Just in case he’s in need of backup though, his sister Thea is always ready to jump into action! The Arrow Speedy Pop! Vinyl Figure and Arrow Speedy with Sword Pop! Vinyl Figure showcase Oliver’s scarlet-clad sister doing what she does best – fighting! Whether she’s taking on baddies with a sword or a bow, these new figures ensure she looks adorable doing it.

Speaking of speedsters, just in from Earth-2 is The Flash Zoom Pop! Vinyl Figure. Bent on wreaking havoc and creating chaos rather than helping to clear Central City’s streets of crime, this is one Funko figure that’s maybe better left in the box! Season 2’s supervillain might be menacing, but standing just 3 3/4-inches tall makes him a teeny bit less terrifying.

No need to wait for another crossover episode to add these DC favorites to your collection! Pre-order from Entertainment Earth and they’ll ship in July!