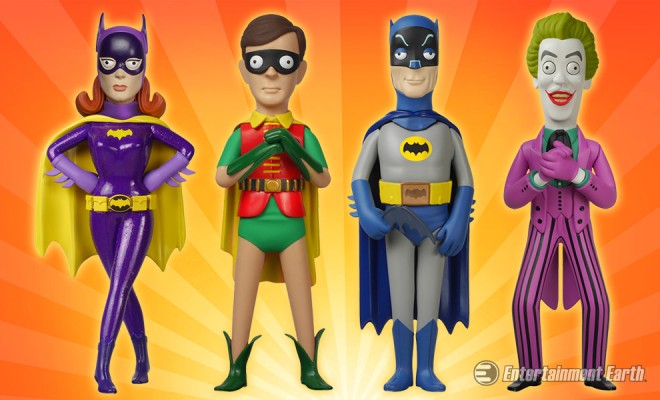 8-inch tall vinyl figures, kooky facial expressions characterized by wide eyes, they must be Vinyl Idolz. And this time they come all the way from the grimy city of Gotham.

Adam West’s Batman makes his debut as a Vinyl Idolz, sporting his classic grey suit, with yellow accents and blue boots, gloves, cape, and cowl. He carries a Batarang in hand to fend off any villains and his square jaw reveals he’s the hero of the 60s we deserve.

Holy Boy Wonder, Batman! Robin sure looks iconic in those green booties and bare legs. His yellow cape hangs from his neck and he stands intimidatingly, punching his fist against his palm. A bad guy thinks he can beat Robin? Ha!

Decked in purple and yellow, Batgirl stands out as both stylish and tough. With her hands on her hips and legs crossed, she perfectly encapsulates her femininity while also being a fierce hero.

Gotham is riddled with villains, but none more terrible than the Joker. Senseless and chaotic, this figure expertly captures Caesar Romero’s classic performance. From the purple pants and coattails to his white face and green hair, he’s gleefully ready to stir up trouble.