They’ll find no gold at the end of this rainbow… only prison. 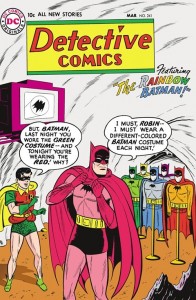 The orange Batman Pop! Vinyl stands approximately 3 3/4-inches tall and comes packaged in a window display box. This is the sixth and final Caped Crusader in the Rainbow Batman Pop! Vinyl line. Don’t forget to subscribe for more news related to the Bat! Now orange you glad I didn’t say Bat-nana.

This vibrant orange Batman is currently available for pre-order exclusively at Entertainment Earth, with a scheduled arrival in May 2015.