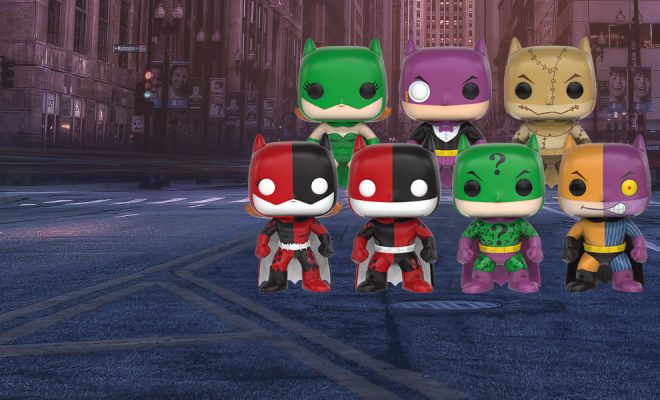 The Dark Knight has met his match! Several of them! Just when you thought you had collected every variation of DC Heroes Pop! Vinyl figures, Funko is introducing a line that will blow your mind. Say hello to famous Gotham villains as you’ve never seen them before – as Batman and Batgirl! These Impopster figures are crossover collectibles worth going out of your way to collect.

Riddle me this: who wears a cape, pointed bat ears, and frightens Gothamites in the night? If you’re thinking it’s the Caped Crusader, you’re wrong. Take a look at the Batman Impopster Riddler Pop! Vinyl Figure. It’s what The Riddler would’ve looked like if he started fighting crime, and you won’t be blamed for getting the true identity confused.

Talk about an identity crisis, get a load of the Batman Impopster Two-Face Pop! Vinyl Figure. Harvey Dent is finally free to administer justice at the flip of a coin from behind the mask of a hero. This is nearly three characters in one! Plus, Batman’s costume gets a dapper update when the Penguin dons it, monocle and all.

And in another stitched-together disguise, you won’t believe the Batman Impopster Scarecrow Pop! Vinyl Figure. If you thought Batman’s original costume was dark, the gruesome Scarecrow aesthetic will make your hair stand on end when it is combined with the Batsuit.

The villainesses of Gotham are getting in on the game, too. Batgirl gets the Impopster treatment with this Batman Impopster Batgirl Poison Ivy Pop! Vinyl Figure. Pamela Isley merges Batgirl’s outfit in form and design with her own scantily-clad look.

The folks at Funko have really outdone themselves this time. All of these are made to the classic Pop! Vinyl conventions. They are about 3 3/4-inches high and come packaged in window-display boxes. While you’re going to want them all right now, you’d better be ready to wait: they all come out at different times later this year. However, you can pre-order each of them today at Entertainment Earth!