Why These Avengers: Endgame Funko Pop! Exclusives Are a Must Buy

As Earth’s Mightiest Heroes – the ones who survived Thanos’ fateful finger snap at the end of Avengers: Infinity War, at least – assemble onscreen to bring the Marvel Cinematic Universe’s first 11 years to their thrilling conclusion, collectors can bring together 11 of the MCU’s most iconic characters, rendered in the instantly recognizable, widely beloved Funko Pop! Vinyl figure style.

These 10 heroes and one villain span the MCU’s history. Tony Stark, Iron Man himself, launched the MCU in 2008. Captain Marvel is still flying high in movie theaters worldwide. This special series of Funko Pop!s includes the first Avenger, Captain America, and also Thor, Black Widow, Hawkeye, and Hulk; War Machine, Nebula, and Ant-Man; and Thanos, the Mad Titan they’ve all sworn to do ‘whatever it takes’ to defeat.

A limited-edition foil pack of three collectible cards accompanies each figure. The full set includes 16 cards: one for each character, as well as holographic foil chase variants for Tony Stark, Captain America, Hulk, Thor, and Thanos. Cards come in blind packaging and are inserted at random, adding an extra dimension of challenge and fun to this already exciting line of Avengers; Endgame collectibles. 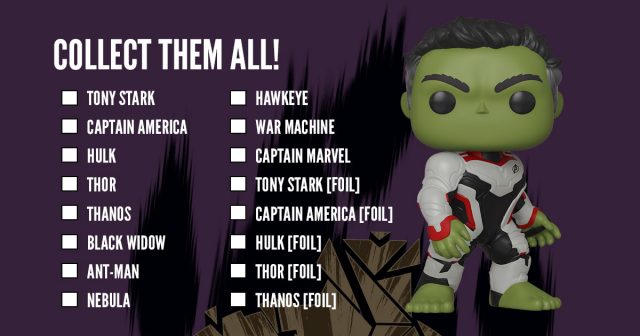 Each Funko Pop! figure stands approximately 3 3/4-inches tall, is updated in appearance to match the character’s look in Avengers: Endgame and is housed in a window box with a sticker certifying it an Entertainment Earth Exclusive.

Anticipation for the final chapter in Phase Three of the MCU is high, and we expect demand for these exclusive will be high, too. Mark the year’s biggest event in superhero cinema by ordering Funko Pop! Avengers: Endgame figures with Limited Edition Collector Cards, available only on Entertainment Earth while supplies last!