Pop!’s Latest Series Is on a Quest to Find the Dark Crystal

For many, the 1982 Jim Henson film Dark Crystal remains a classic of the dark fairy tale genre. This epic clash between good and evil may have been marketed for kids and families, but the filmmakers definitely didn’t pull any punches, what with its themes of genocide, the duality of nature, and the power of sacrifice.

With character designs by Brian Froud – who also contributed to another Henson favorite, Labyrinth – these fairy creatures aren’t all flowers and sunshine. With their misshapen bodies and physical deformities, the characters feel more realistic than cutesy.

And now Pop! is paying tribute to the cult film with new figures that stay true to the original tone of the movie.

The Chamberlain Skeksis represents a race of greedy, cruel, vicious creatures who cover their weak, grotesque bodies with opulent finery. You can almost hear his whining, pleading voice as he squints with malicious pleasure, notched sword in hand.

UrSol the Chanter, on the flip side of the coin, is the head of a tribe of four-armed mystics, teachers, and healers. They move and speak slowly, but their thoughts are deep and powerful.

Aughra may look fearsome, with her wrinkles, scowl, and single eye, but this witch is only slightly curmudgeonly, and is willing to help those who are pure of heart.

Good thing Jen is one such pure-hearted hero; this Gelfling adventurer has always thought himself the last of his kind, and leaves his master, UrSol, and adoptive family of mystics, to recover the last shard of the Dark Crystal.

Before journey’s end, Jen finds Kira (and her spunky pet Fizzgig), another Gelfling who helps him put together the pieces of his past – as well as the pieces of the Dark Crystal.

Finally, Pop! has released a near-complete set of characters from a beloved movie – this Dark Crystal collection is a must-have for fans of Henson and dark fantasy. Each figure stands 3 3/4-inches tall and comes in a window box perfect for display. The whole bunch will be arriving very soon, so pre-order now to secure them all! 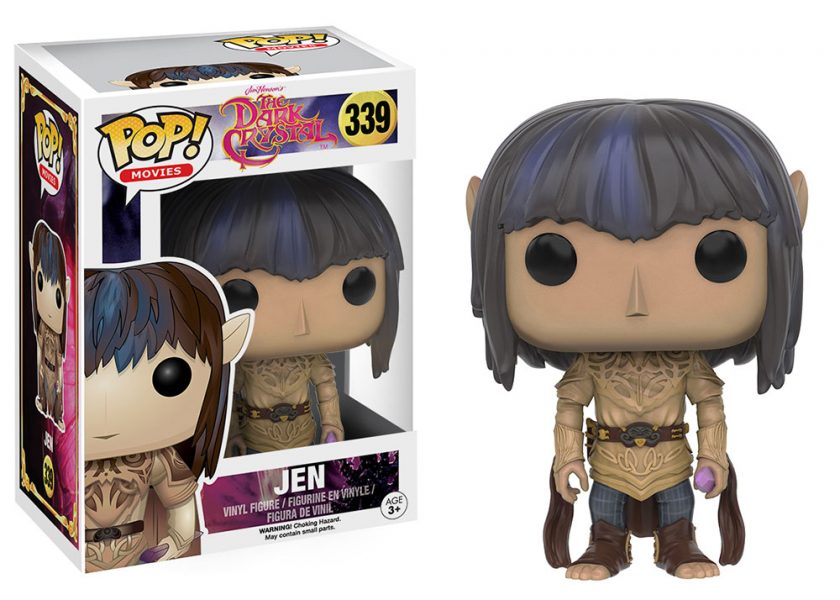