Travel to Wonderland, a Provincial Town, and Under the Sea with New Disney Dorbz

It’ll be a very merry unbirthday to you when you get Funko’s latest Disney Dorbz vinyl figures!

To sleep, perchance to dream of a bizarre and colorful world called Wonderland, full of strange characters who have been transformed into 3-inch tall vinyl figures.

Alice, in her blue dress, explores until she comes across the raving Mad Hatter! His white hair (a side-effect from the mercury) sticks out from his massive top hat, boasting a 10/6 sign which is the price of the hat – 10 shillings and 6 pence. Just make sure you get the last figure too, the majestic Queen of Hearts, or else it will be off with your head!

Or perhaps it’s adventure in the great wide somewhere that you dream of? Then don’t miss these Beauty and the Beast figures, including Peasant Belle and Belle and Beast from their romantic night together in the enchanted castle. Have you ever seen a more adorable beast? I didn’t think so.

But darlin’ it’s better down where it’s wetter! So say the adorable Ariel and Ursula Dorbz from The Little Mermaid, at least. From fins to tentacles, these figures are colorful and will remind you of the best childhood memories.

Each Dorbz comes in a double-sided window display box. They’re available for pre-order at Entertainment Earth and expected to arrive in March 2016. 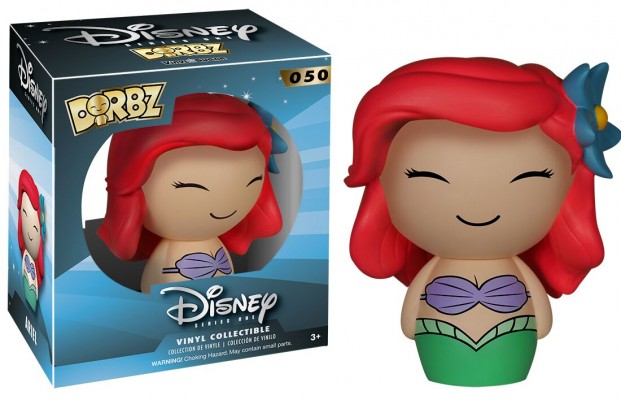