Jazz Up Your Collection with Disney Pop! Vinyl Figures from the Bayou

Head down to the bayou for jazzy new Disney Princess and the Frog Pop! Vinyl Figures from Funko!

The Princess and the Frog is Disney’s 49th film in their Animated Classics series and has some of the most colorful and lively characters! Those colors certainly do Pop! with these brand new vinyl figures.

First up is the belle of New Orleans herself, Tiana! A hard-worker and a dreamer, she’s a timeless princess. Her Pop! Vinyl figure features her green dress from the end of the film. She wears her crown, pink eyeshadow, and strands of hair fall loosely around her face as she’s posed in a jazzy stance.

That’s not all that’s magical about Tiana’s figure. She comes with her amphibian paramour, Naveen! The little frog comes packaged with Tiana but is a separate figure.

The music of the bayou is all thanks to Louis the Alligator. With a broad, toothy smile on his face, Louis carries his trumpet and is ready to make some sweet tunes.

Dr. Facilier, the villain of the film, practices dark voodoo magic. He’s seen here in his black, red, and purple outfit. He carries his cane, wears traditional 1920s shoes, and has a top hat on his head showcasing a skull and crossbones.

So dig a little deeper for The Princess and the Frog figures, currently available for pre-order at Entertainment Earth with an expected arrival of August 2015.

» See all Princess and the Frog Pop! Vinyl Figures 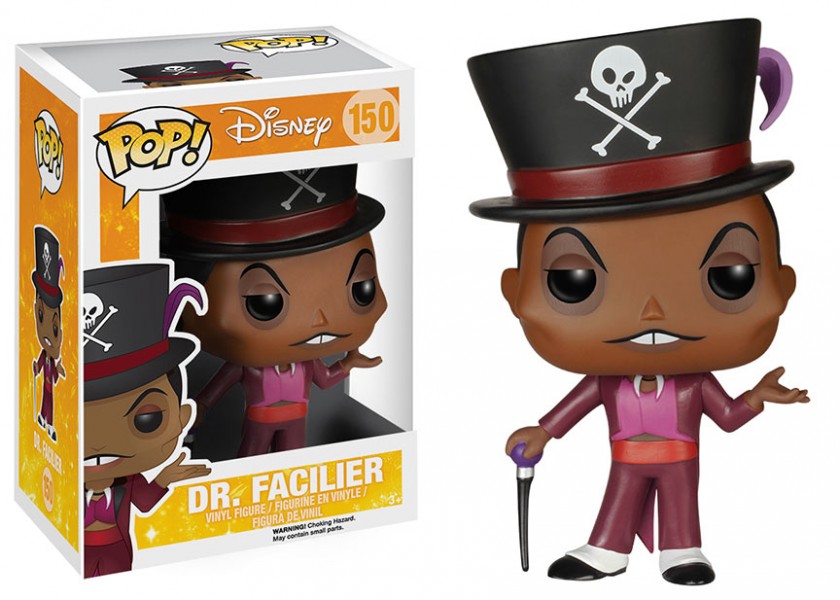