The Legacy Collection Is Evolving

The thrilling multi-player video game Evolve can now be part of your action figure collection, thanks to Funko’s Evolve Legacy Collection action figures!

You’ll be able to recreate scenes from your cooperative/competitive virtual adventures with these four human figures and the Goliath monster figure. In the game, the Hunter players must work together to defeat the Monster, while the Monster player must accomplish their goal first. Team up to take down the beast on the planet Shear, where flora and fauna act as an adversary to man and monster alike.

There are four playable Hunter classes, including Assault, Trapper, Medics, and Support. These figures represent each class.

Hank is the Support Hunter who believes in the value of a hard day’s work as well as the joy of indiscriminately shooting predators. He’s also capable of turning his nearby allies invisible. Take that, Monster! With over 20 points of articulation and standing about 6-inches tall, he comes with weapon accessories and a cigar in his mouth.

Maggie is a Trapper Hunter, capable of tracking down monsters. The mysterious loner relies on her faithful pet to help find their prey, while Maggie utilizes her weapons to take them down. Check out her Machine Pistol and tooth necklace on the 6-inch tall, articulated action figure.

Sniper and Medic Val is an invaluable Medic Hunter. With her Armor-Piercing Sniper Rifle as an included accessory, she’s perfectly capable of stalking prey the size of a small asteroid. Her sleek armor shows that she’s fully prepared for a fight.

Assault Hunter Markov can become temporarily invulnerable! He possesses a deadly arsenal, which can be seen in his included weapon accessories. Watch out, because his scope can see all and he lives for glorious battle. He stands approximately 6-inches tall with 20 different points of articulation.

Where would the Hunters be without something to hunt? The highly durable melee monster Goliath can punch through a starship and breath fire. With over 20 points of articulation, you can pose it like the angry beast it is!

These epic action figures are currently available at Entertainment Earth and are scheduled to arrive in May 2015. 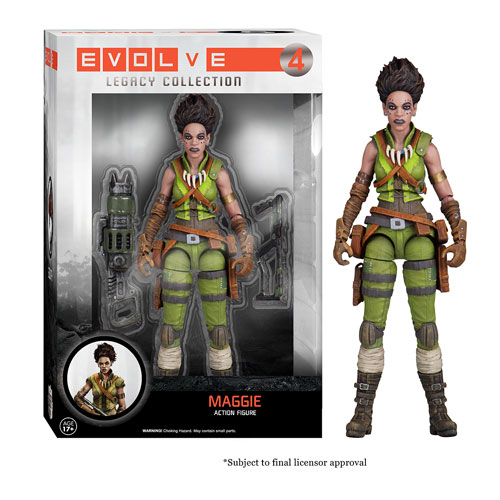