These Fight Club Figures Are Stirring up Mayhem… Project Mayhem

We all know that the rules of Fight Club dictate that we not talk about Fight Club. However, the rules never said anything about dealing this double-punch: Funko has revealed all-new Fight Club 3 3/4-Retro Action Figures, now available for pre-order!

Straight from the thrilling film based on the novel penned by Chuck Palahniuk, these figures are a double whammy of retro ReAction and 90’s novelty.

The cult classic stars the Narrator, a nameless protagonist played by Edward Norton, as well as Brad Pitt’s Tyler Durden and Helena Bonham Carter’s Marla Singer. This trio is responsible for wreaking havoc and mayhem – even Project Mayhem – which considerably excites the life of the otherwise dull and depressed Narrator.

Now you can narrate your own story and re-create the Narrator’s reality by owning these classic figures!

The Narrator ReAction Figure’s sleepy demeanor and unassuming wardrobe can be directly juxtaposed with the Tyler Durden ReAction Figure’s exciting – might we even say, sexy – brightly colored clothes and suggestive soul patch. Tyler even comes to us as a shirtless ReAction Figure. Yum!

Last but not least, we have Marla Singer, who – much in the style of Helena Bonham Carter – inhabits a dark sensuality about her, as evidenced by her all-black garb and dark, sleepy eyes.

This compelling quartet of figures is sure to add a touch of thrilling mystery to your collection! It’s not love or anything, but we think you’ll like them, too.

These exciting ReAction Figures are currently available for pre-order at Entertainment Earth with an expected arrival of August 2015. 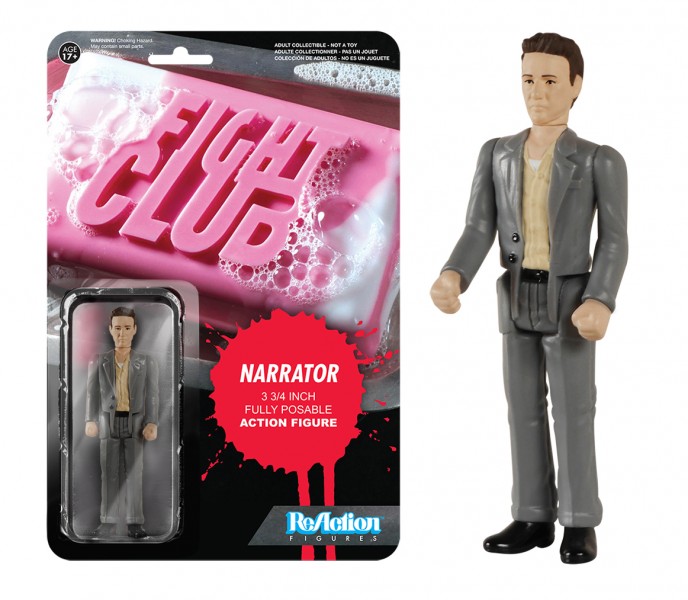