This Mandalorian Hikari Figure Has No Love for the Empire 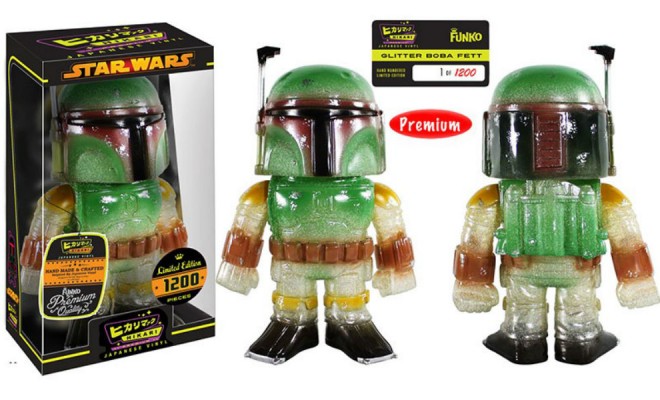 Don’t tell Han or Lando, but this new Hikari Sofubi from Funko is one of the coolest guys in the galaxy. The Glitter Boba Fett Premium Sofubi Figure is second in the Star Wars line, following the Greedo Hikari figure.

There’s no denying the level of cool Boba Fett has – he’s one of the most popular characters in Star Wars history, despite being a rather mysterious character. Perhaps that’s why he’s so cool.

This figure is pretty dang cool as well. It really lives up to its name of glitter. While it has the same color scheme of the Boba Fett we know and love, the figure has a shiny, sparkly look. It almost looks like crystallized sugar which is both delicious and aesthetically pleasing.

He stands 8-inches tall with his arms at his side, and his jet pack on his back. He’s after you, Solo.

A limited edition of only 1,200 pieces, you’ll definitely want to get this figure before it’s too late! Each piece is individually numbered and comes in a window-display package.

The Glitter Boba Fett Premium Sofubi Figure is currently available for pre-order at Entertainment Earth, with free shipping. And stay tuned to find out who will be next!