Bring the Wild West to Your Collection with Hateful Eight Pop! Vinyl Figures

Four of the eight are available as Funko’s popular 3 3/4-inch vinyl figures, each looking roughed up and ready for a fight.

The two figures you have to get first are John “The Hangman” Ruth and his prisoner, Daisy Domergue. Finding shelter in a house during a blizzard is how the tension and conflict of the film transpires. His figure looks particularly tough as he holds a rifle with a handcuff on his left hand. His big, bushy mustache completes the look.

Meanwhile, the detail of Daisy’s figure is great, especially her bloodied up face to show the hardness she’s faced.

Another figure is Samuel L. Jackson’s Major Marquis Warren, whom John and Daisy meet on the road. With revolvers at the ready and a big brimmed black hat on his head, the Major will take on anyone who challenges him.

Last is Sheriff Chris Mannix, standing ready for action with his hands at his side, prepared to draw his revolver in moments. His eyes are rimmed with exhaustion and strife.

Each figure comes in window display packaging and are great for Pop! and Tarantino fans alike. They’re available for pre-order at Entertainment Earth and expected to arrive in March 2016. 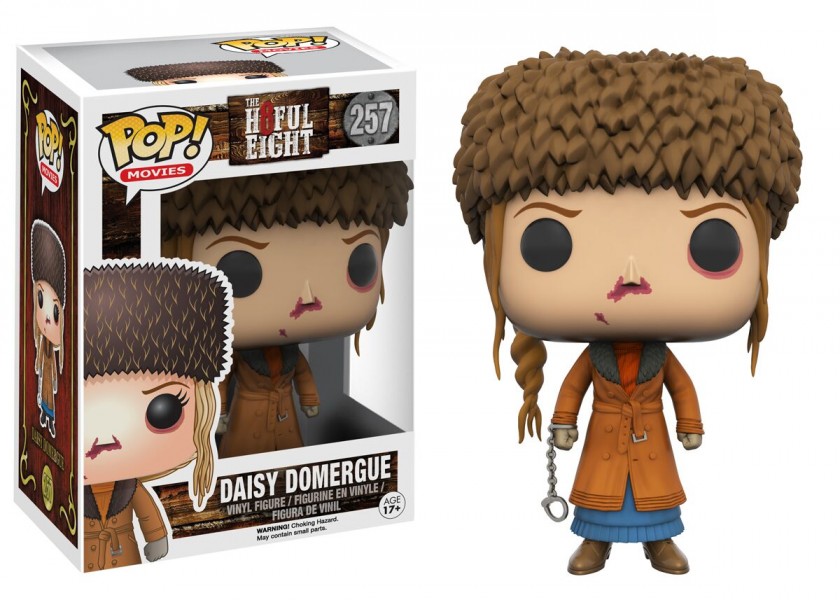