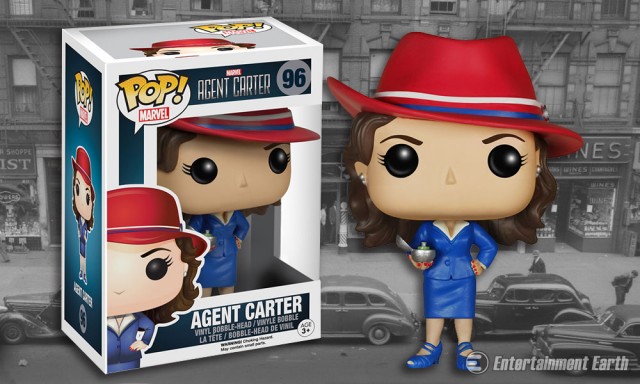 Peggy Carter is a hero in her own right and now a fabulous Pop! Vinyl! Check out a new figure from Funko with the Marvel Agent Carter Pop! Vinyl Figure!

Living in the 40s isn’t always easy for Peggy Carter, but she always comes out on top and gets the job done. Of course, she also looks good doing it.

Wearing the blue suit and red hat from her television series, Agent Carter looks positively flawless. No detail is overlooked here, from her earrings to her red nail polish.

Don’t mistake her pretty looks for weakness, though, because that will be the last mistake you make. She’s tough and savvy, even as an adorable Pop! Vinyl Figure.

As this figure, she carries the vial of Steve Rogers’ blood in one hand and has her other hand on her hip.

She stands 3 3/4-inches tall and comes in window display packaging.

Agent Carter is currently available for pre-order at Entertainment Earth with an expected arrival of August 2015.