This Funko Pop! Exclusive is Groovy and Bloody!

Funko has partnered with Entertainment Earth on another Pop! favorite, and he’s an impatient and immature sort of guy with a very itchy trigger finger. Oh, and a literal chainsaw hand.

The Ash Vs Evil Dead Ash Bloody Version Pop! depicts everyone’s favorite middle-aged S-mart stock boy fresh from a fight with the evil Deadites. With his chainsaw hand firmly in place and shotgun at the ready, the chauvinistic charmer has just been through yet another bloody battle.

For the last thirty-five years, the Evil Dead series has been a cult favorite, spawning three movies, countless comics, and a successful Starz series that returns for a triumphant season 3 this year. At this point, who doesn’t know – and love – the chin-tastic B-movie king known as Bruce Campbell?

This Entertainment Earth exclusive can’t be found anywhere else, and will make a downright groovy addition to any Evil Dead collection. Don’t miss out: pre-order now. And hope that you won’t be dead before dawn… 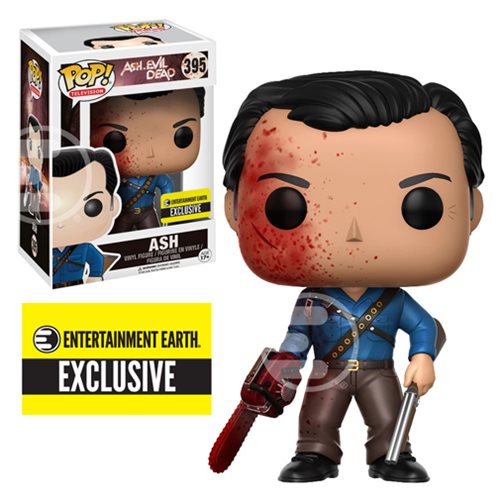