Journey through decades of women’s style with a fantastic new addition to an already popular line of vinyl figures – Barbie Rock Candy Vinyl Figures by Funko!

Rock Candy is a new line of vinyl figures by Funko, and can be distinguished from Funko’s Vinyl Vixens based on their 5-inch tall size. Also, check out that awesome packaging, reminiscent of Pop! Vinyl Figure boxes.

Are Rock Candy figures going to be the next craze? Well, according to this writer, they are more than worthy of the bandwagon. From this sneak peek at the new Rock Candy line, I’m jumping out of my boots (or, more appropriately, stilettos) to collect them all!

Best of all, you don’t necessarily have to be a fan of Barbie to enjoy these figures, as their distinctive appearance alone sets them apart from traditional Barbie dolls. If you love all things vintage, you’ll truly love these vinyl beauties!

With the class of Mad Men’s Betty Draper comes the 1959 vinyl figure. She sports a fashionable one-piece bathing suit, posing with one manicured hand placed on her hip, and holding cat-eye sunglasses that are truly the cat’s meow! Her vintage aesthetic is further exemplified by her retro red lips and rose painted nails. Bring her to the beach and make swimming a gas!

Fly me to the moon with the 1965 vinyl figure. Out of the likes of Forbidden Planet comes a 60’s astronaut. Clutching a space-helmet and rocking a metallic body suit, the 1965 figure tells of fantastical intergalactic wonders to come in 1969…

We’re totally cranked over the 1971 hippie figure! Boogie on down to Funko-town and say hey to the hippie, who dons a psychedelic camo outfit and wears a headband holding together a luscious mane of golden hair.

Just what the doctor ordered! The 1973 figure features a surgeon in blue scrubs, whose arms are folded confidently. We need this figure, stat!

The Superstar 1977 figure wants you to know she’s stealing the show. Shake your groove thing with this fancy fox, who sports a fabulous boa! Does she remind you of someone? …Perhaps Dolly Parton?

Time to go to Funky Town with the 1980 figure, whose afro is movin’ and her hips are groovin’. Just look at those pumps, and the detail in her dress and earrings. She’s smart, sassy, and sensational!

Time for a work-out: the 1984 figure is here to work those abs! She reminds us of Olivia Newton-John… in fact, you can almost hear “Physical” in the backdrop of her display box.

Bring back the classic look of Barbie throughout the ages! These figures are what’s buzzin’, cuzzin’, and they’re currently available for pre-order at Entertainment Earth, with a projected arrival date of August 2016. 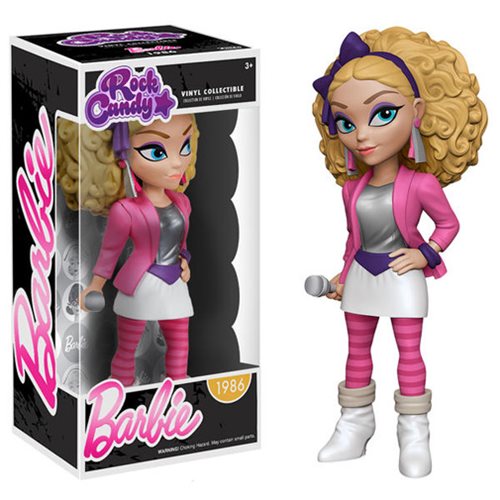