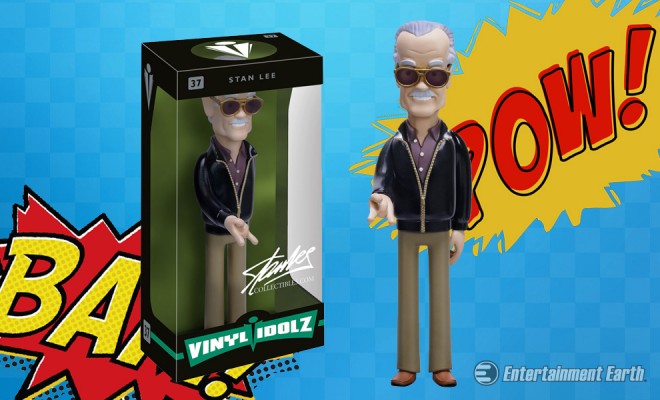 This Stan Lee Vinyl Idolz Vinyl Figure features the legendary comic book creator, making the “thwip” hand just like Spider-Man! But that’s not all this American icon is known for.

Comic book writer, editor, publisher, media producer, television host, actor, and former president and chairman of Marvel Comics are a few of the other hats Stan “The Man” Lee has worn in his lifetime.

Stan Lee played a pivotal role in the growth of Marvel comics – turning it into one of the biggest corporations today. He co-created famous characters such as Spider-Man, the Hulk, the Fantastic Four, Iron Man, the X-Men, and many more.

Standing about 8-inches tall, this figure comes with a display base and is packaged in a window display box. Stan Lee is shown wearing a black zip-up jacket, a purple dress shirt, beige slacks, brown shoes, and his infamous gold sunglasses with slicked back gray hair.

No Marvel collection is complete without this Stan Lee Vinyl Idolz Vinyl Figure. Order yours today at Entertainment Earth, where in-stock orders of $79 or more receive free shipping.