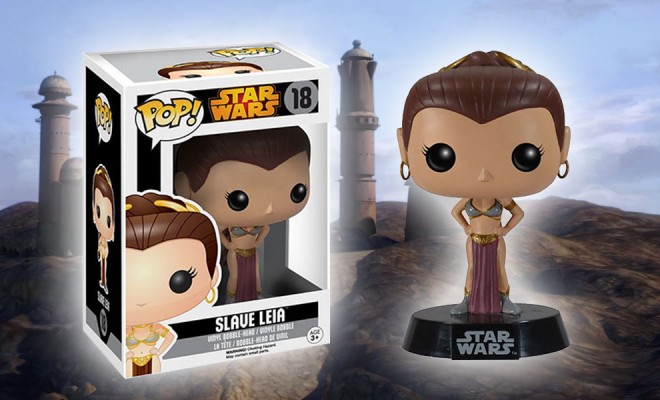 Not too long ago, we told you how Funko is opening the vault to re-release their Star Wars Pop! Vinyls, starting with Luke Skywalker.

Today is a good day for fans because Funko announced that the Star Wars Slave Leia Pop! Vinyl Bobble Head is the second in the re-release schedule. The vaulted Pop! Vinyls will come in special edition packaging to distinguish them from the original run.

Princess Leia’s metal bikini is one of the most iconic ensembles worn by any character ever. Worn when she was held captive in Jabba the Hutt’s palace at the beginning of Return of the Jedi, Leia quickly turns captivity on its head and uses her chains to strangle Jabba to death.

This stylized bobble showcases her fortitude, featuring her hands on her hips on a black base. She stands 3 3/4-inches tall and comes in a displayable window box, making a perfect addition to your Star Wars collection.

The Slave Leia Pop Vinyl Bobble Head is currently available for pre-order at Entertainment Earth, with a slated arrival in April 2015. We will also keep you up to date with which Star Wars Pop! Vinyls are coming out of the vault.