Summer is in full swing with tons of blockbuster movies right around the corner. In box office news, Oceans 8 stole the spotlight from Solo: A Star Wars Story with an impressive $4.1 million in weekly sales. That said, the all-female reboot will have a hard time competing with Incredibles 2, which premiered today.

This week saw tons of new toy and superhero news from San Diego Comic-Con, plus E3 just ended with a bang. Seriously, did anyone else get goosebumps watching that new Smash Bros. trailer?

There’s a whole lot to cover this week, so can we just take a quick moment to say TGIF?

It’s been 14 long years since the first Incredibles movie, yet somehow, some way, the original cast is back. With a current Rotten Tomatoes score of 93%, superhero sequels don’t get much better than this. That said, audiences can expect a handful of new characters and plot twists, including one extra maniacal supervillain [SPOILER ALERT]. We’ve got a handful of cool new toys to coincide with the film’s release, so if you haven’t yet, make sure you take a look at our new Incredibles LEGO, Funko, and Nano sets. 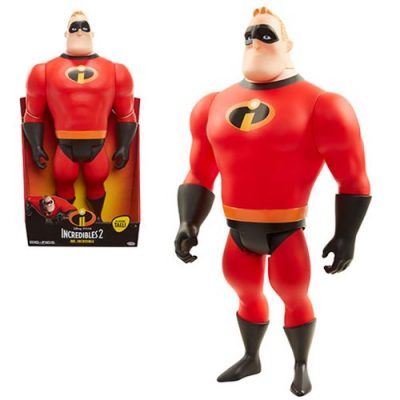 Every Jurassic Park Actor Is a Star

They say life always finds a way. In this case, it’s finding a way straight to Hollywood. That’s right, seasoned JP star Jeff Goldblum has finally been awarded his own star on the Hollywood Walk of Fame. In anticipation of the upcoming Jurassic World release, which comes out June 22nd, the powers that be have awarded Dr. Ian Malcolm his own star. It’s about time if you ask us!

Straight from director Patty Stevens comes this new Wonder Woman still featuring Steve Trevor with peppered gray hair and a new ’80s look. While updates surrounding the sequel are still pretty hush-hush, Jenkins did drop a few new details, including the film’s working title (Wonder Woman 1984) and, you know, the fact that Steve’s back. You can check the still below.

And if one superhero still wasn’t enough, we also got a first look at Mera and Black Manta in the upcoming Aquaman movie. As one of the standout characters in last year’s Justice League, Mera’s announcement sent tidal waves through the web. Black Manta, on the other hand, actually looks tough enough to give Jason Momoa a run for his money.

With just a month until San Diego Comic-Con 2018, it looks like HBO’s Game of Thrones and Westworld are opting to bow out of this year’s panels. Fortunately, Doctor Who’s looking to step in with their first-ever SDCC panel. No word yet on Marvel’s involvement, but they probably have their hands full at the moment.

In toy news, we’ve started to reveal all our SDCC exclusives. While they all look great, we’re particularly stoked about the Infinity Gauntlet Pin Mate™ Wooden Collectibles Set of 16 – Convention Exclusive.

And finally, be sure to check out our latest Hot Off The Truck video below for an inside look at all the cool new toys and figures in stock this week. The latest video features new Captain America and Ironman Funko products, Batman releases, an epic resin Smaug trophy from The Hobbit, and a whole lot more.