Deadpool and his X-Force shot to the number one spot this week, with Cap ‘n’ Co. moving down a peg. Meanwhile, Solo: A Star Wars Story premiered to near-unanimous acclaim. And if Han hogging the spotlight wasn’t enough, news broke earlier this week that Logan director James Mangold is set to take the helm of an upcoming Boba Fett movie. Yup, your favorite intergalactic bounty hunter is getting his own spinoff, with a rumored Obi-Wan film to likely follow shortly after.

But that wasn’t all that happened this week; we also have new updates by way of LEGO, Ghostbusters, and even The Simpsons – well, sort of. This week was jam-packed with nerd news, so let’s dive in.

The Toys That Made Us Is Back

After a months-long hiatus, the second season of acclaimed docu-series The Toys That Made Us is now available on Netflix. New episodes feature inside looks at the minds behind Star Trek, Transformers, LEGO, and even Hello Kitty. If you haven’t watched the show, expect tons of great interviews plus never-before-seen facts and insider notes. You can check the latest trailer below.

And in other Netflix news, The Simpsons creator Matt Groening released a new teaser last week for his upcoming fantasy series, Disenchantment. At what could only be described as Futurama meets The Simpsons meets a fairy tale, the new series will include 10 episodes and will premiere on August 17th. Is anyone else getting Leela vibes from the still below?

That’s right, folks. In addition to reprising his role in the upcoming Bill and Ted movie, Keanu’s bringing John Wick out of retirement for the third installment in one of the greatest shoot-em-ups since, well, ever. Straight from John’s Twitter account comes this macabre teaser. While the new film is scheduled for release November 17, 2019, you can help make the wait a little easier with this epic John Wick 2 statue.

The Blocks Are Back In Town

2014’s The LEGO Movie was nothing short of an international smash. With a star-studded cast and tons of awards to boot, it’s only natural that the blockheads behind the LEGO franchise would want to make sure all the pieces were in the right place before they started on a sequel. Well, it looks like that time has come, as LEGO just unveiled a new teaser poster for the upcoming film. Aptly titled The LEGO Movie 2: The Second Part, the film is expected to (finally) be released in early 2019. Check the latest teaser below.

It may still be a ways off, but next June marks the 35th anniversary of the original Ghostbusters movie. Hard to believe it’s been that long, eh? New details courtesy of Kidscreen shows the team behind the screams is looking to celebrate in style by releasing a handful of new products, toys, and more. Here’s hoping for a new Slimer figure that shoots projectile ectoplasm. The grosser, the better.

And in toy news, we got a look at the upcoming Black Series Bike Vehicle that’s designed to look just like the one from the Solo: A Star Wars Story movie. The epic 6-inch swoop vehicle will come with the Enfys Nest action figure and is scheduled for release this July, but you can lock in your pre-order after you watch the movie today. 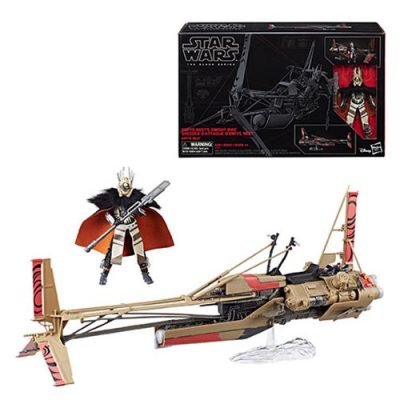 But that’s not all! Check out our latest Hot Off the Truck video below for an inside look at all the cool new toys and figs in stock this week. And while you’re at it, be sure to have a listen to our Toy of the Week Podcast page where we feature a new toy every week.