A big anniversary deserves a big celebration – maybe even a jumbo one!

To that end, Gentle Giant is doing exactly that to mark Star Wars 40th Anniversary this year.

The expert designers and manufacturers are re-creating one of the earliest and biggest Star Wars merchandising campaigns in the franchise’s history on their signature Jumbo scale: the celebrated Early Bird Certificate Package!

Star Wars hit bigger in 1977 than anyone, even George Lucas, dreamed it would, grossing $187 million (more than $775 million in today’s money) by November – enough to snatch the title of all-time domestic box office champ out of the jaws of Jaws. That big demand for movie tickets led to a big demand for merchandise.

Kenner Toys held the action figure license but wasn’t ready to roll them out. So with the year-end shopping season looming, the company manufactured a last-minute holiday miracle. The Early Bird Certificate Package promised those who purchased it they would get the first four figures as soon as the toys were ready.

The Force was strong with the “empty box campaign”! Kenner sold several hundred thousand units, and satisfied customers had the first Star Wars action figures in their hands starting in mid-January. 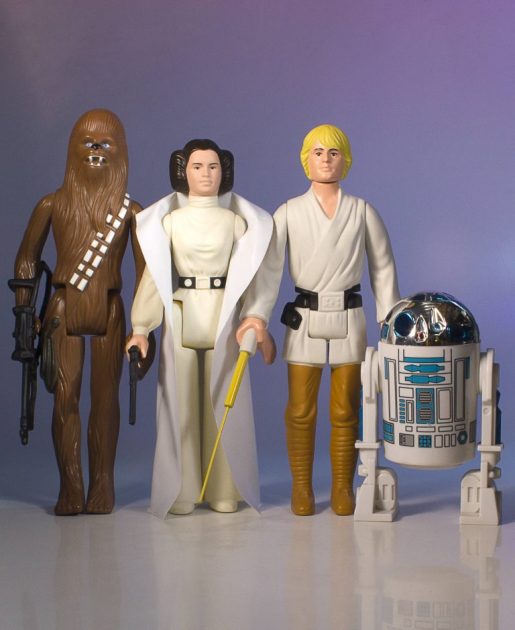 But you won’t have to wait for anything when your Gentle Giant Jumbo version of the box arrives. It comes with oversized versions of those first four figures: R2-D2, Princess Leia, Luke Skywalker, and Chewbacca.

This fantastic four-pack even comes in a big version of their original white plastic mailer tray. The packaging also includes super-sized stickers and a larger reproduction of the original folding display stand, complete with perforated cards for “Space Club” members.

No detail from the original 1977-78 campaign has been overlooked. They’ve all been enlarged!