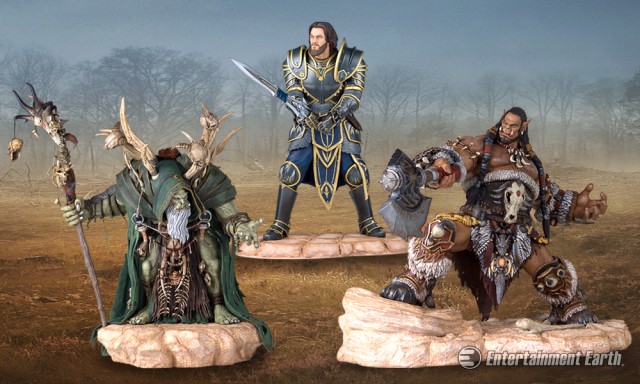 The peaceful realm of Azeroth stands on the brink of war as its civilization faces a fearsome race of invaders: Orc warriors fleeing their dying home to colonize another. As a portal opens to connect the two worlds, one army faces destruction and the other faces extinction. From opposing sides, two heroes are set on a collision course that will decide the fate of their family, their people, and their home. So begins a spectacular saga of power and sacrifice in which war has many faces, and everyone fights for something.

Fighting for The Alliance, Warcraft features Travis Fimmel as Anduin Lothar, and on the side of The Horde is Toby Kebbel as Durotan, Daniel Wu as Gul’Dan, and Robert Kazinsky as Ogrim.

Collect all four statues! Each are hand casted, hand painted, and include a hand numbered edition size. Pre-order them today at Entertainment Earth with Free Shipping. Expected to arrive in Fall 2016.

Are you excited about the new World of Warcraft movie? Sound off in the comments!