Get the Coolest Transformers: The Last Knight Collectibles Swag

In case you’ve been living under a rock, you should know that a new Transformers movie is hitting the big screen this week. From the looks of things, Transformers: The Last Knight looks to be the coolest thing to happen to the franchise since 2007’s Transformers. But regardless of the success of a big-budget blockbuster, the important thing to collectors is that the merchandise is stellar. So here are some of the coolest toys to come out of the movie so far: 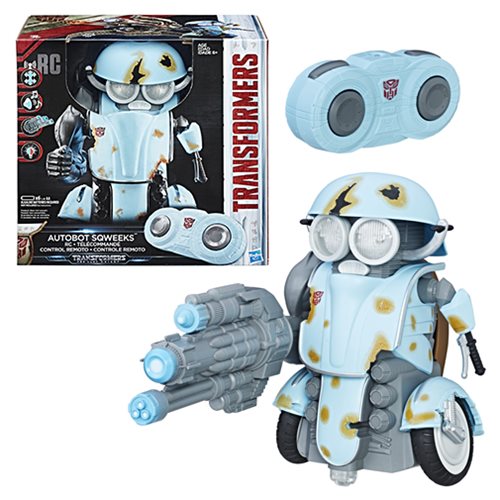 This adorable robot looks like the cute sidekick of the Transformers universe. The smallest of the Autobots, and sorely in need of some repair, his perseverance and empathy shine through. This RC controlled robot has motion and sounds that are modeled directly from the film version. Complete with phrases, sound effects, and music inspired by the film, this is one Autobot that will navigate his way into your heart!

This amazing helmet will help you find your inner hero! Completely wearable and armed with 21 phrases and sounds from the film, you will take on the role of Autobot Leader with style. You, too, can be more than meets the eye.

Featuring the next evolution of robots in disguise, these transforming toys from The Last Knight are of remarkable quality. Standing about 9-inches tall, this collection includes supreme leaders Megatron and Optimus Prime in their latest iterations.

Saving Earth is never easy, but with these three figures, it could hardly be more fun. This set includes amazing Knight Armor versions of Bumblebee and Megatron, as well as a really sweet Grimlock. Made with Hasbro’s known eye for quality and detail, these three figures are unmatched.

We’ve saved the best for last in this round-up. Inspired by the iconic fire-breathing beast from the film, this Dragonstorm figure really does reveal more than meets the eye! With a high-tech Cyberfire effect, the dragon’s mouth can reveal hidden symbols on Turbo Changer Figures. This figure measures in at a foot tall, but its majesty is far greater.