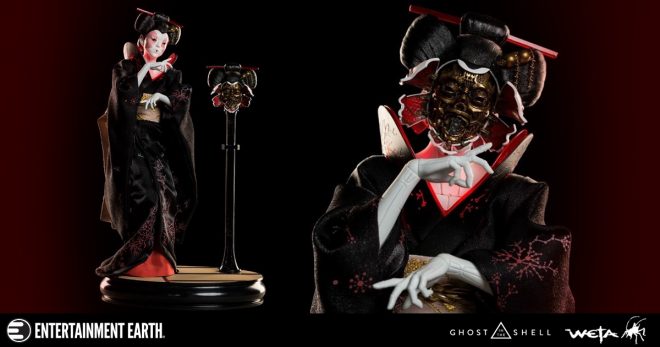 The new Ghost in the Shell live-action film has reimagined the robotic geisha from the series Ghost in the Shell Stand Alone Complex.  The robotic geisha are beautiful and also downright terrifying. The outer shell of the geisha face was based on 3D molds of Japanese actress Rila Fukushima’s face. The outer layer opens up much like a flower blooming but what resides below the shell is truly the stuff of nightmares.

The Ghost in the Shell Geisha 1:4 Scale Statue was expertly crafted by the same Weta Workshop artists that brought the robotic geisha to life in the film. The geisha stands upon a traditional tatami mat. The statue includes two interchangeable heads and a stand to display the second head next to your statue similar to a traditional samurai helmet stand.

This statue is a limited edition with only 500 pieces so make sure you pre-order yours now!