If You Have This Ghost Statue, You Have Everything

A Closer Look at the Monstarz Ghost Resin Statue

The miserable, wounded, and bitter old frontman of Ghost, the Swedish rock band, is back and better than ever.

Amok Time Toys, New York’s largest action figure superstore and manufacturer of action figures, comics, and collectibles, has resurrected Papa Emeritus II as a Ghost resin statue to launch its new series of mini statues called Monstarz. This statue of the former lead singer stands 5-inches tall and is hand-painted with devilish details including papal black and gold robes, and a papal hat with the iconic grucifix. Although his outfit might look more in line with something the younger and more garish Papa Emeritus III would wear, there’s no denying the resemblance to the ghastlier visage of Papa II with deep-set eye sockets that make his multi-colored eyes really pop.

This limited-edition statue is a must-have for Ghost fans, so get your hands on it before it is removed from service by Papa Nihil. 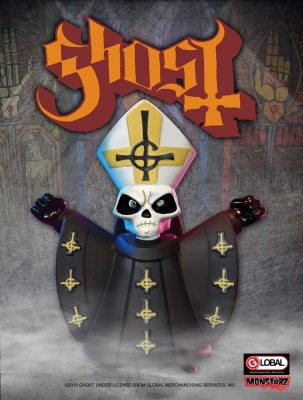