Coming in November 2014 is the Godzilla 2014 Movie SH MonsterArts Action Figure from Bandai Tamashii Nations! This articulated figure is based on the 2014 film directed by Gareth Edwards. 60 years after his creation, Godzilla is making a comeback in both Hollywood and the hearts of many. 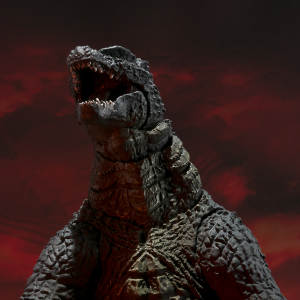 Brought to life by the popular Yuji Sakai, best known for the Godzilla Complete Works, this sculpt of the 2014 Godzilla is a worthy commemoration for the 60th anniversary. In all his magnificent detail, Godzilla truly belongs on the shelf of any Godzilla fan.

Godzilla’s articulation allows amazing posing capabilities. The magnificent detail can be seen from head to tail in stunning accuracy. Intricate textures recreate Godzilla’s recognizable scales and spikes. With a jointed jaw, Godzilla reenacts his ferocious roar. The nearly 6 inch tall figure does not feature sound but could surely knock down any city.

The 2014 Godzilla film retells the monster’s origin story in contemporary times, set in the present day. The film was co-produced by Legendary Pictures and Warner Bros. Pictures. Godzilla became an immediate box office success, which promoted Legendary to greenlight a sequel.