There are few pop culture franchises that not only inspire such a deep dedication from a fan base but have the longevity as Godzilla. From his first appearance in 1954 to his upcoming battle with Kong, the King of the Monsters has had several of his incarnations memorialized in sofubi, action figures, plush, and more collectibles. Recently, companies like NECA, FiGPiN, and Diamond Select are making a new generation of Godzilla toys. Let’s take a look at Godzilla in his various forms: 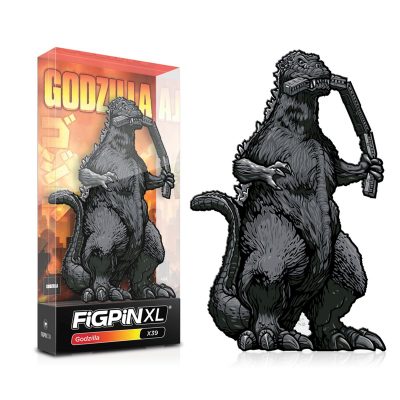 From FiGpiN, Godzilla (1954) is coming to life in the classic monochromatic form! This 6-inch tall Godzilla FiGPiN XL Enamel Pin pays homage to the original film. Godzilla is shown chomping on a train from his iconic look in the original 1954 movie! The pin comes packaged in a soft plastic packaging. This is #X39 in the collection.

The second-generation Godzilla, or Showa Godzilla, comes from the Deforeal series of vinyl figures, which combines super-deformed with realism. This Godzilla was seen in the film Godzilla Raids Again (1955)! With colors based on the black-and-white of the film, Godzilla is now available in the size of the palm of your hand and is waiting to join your collection!

This version of the beloved monster is based on the one-sheet poster for the movie’s U.S. release, Godzilla, King of the Monsters (1956)! The package insert doubles as a foldable backdrop that brings the one-sheet to life-Godzilla can be posed in the fold of the backdrop creating a 3D version of the poster illustration in toy form.

Showa Godzilla’s appearance would vary from film to film but the most drastic change came in 1962. By King Kong vs. Godzilla (1962), this version of the famous kaiju was less frightening with large eyes, no ears, and rounder dorsal fins. The 12-inch figure features over 30 points of articulation, including an articulated tail!

Based on its appearance in the film, Mothra vs Godzilla (1964), Godzilla stands approximately 6-inches tall and measures 12-inches long from head to tail. Featuring over 30 points of articulation and an articulated tail, Godzilla will come packaged in a collector-friendly window box packaging with opening flap.