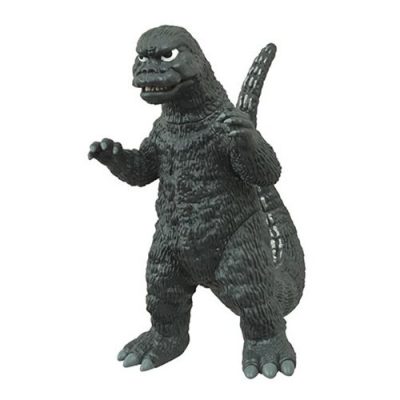 Godzilla is exactly as he appeared in Godzilla vs. Mecha Godzilla (1974)! This 12-inch tall rendition of the King of All Monsters in his full 1970s glory, large cartoonish eyes, and softer facial features. The bank has coin slot on his back and a removable tail that reveals an updated and improved access door. Measuring 18-inches long from nose to tail, he is the perfect addition to any Godzilla collection!

Next up is Godzilla’s appearance in Godzilla: King of Monsters (1988) (also known as Godzilla: Monster of Monsters) video game! Godzilla stands over 6-inches tall and measures nearly 12-inches long, with over 30 points of articulation (including bendable tail) and dorsal plates to match his in-game silhouette. Detailed stylized paint decoration reproduces the game’s pixelated look. The figure comes in a special window box package inspired by the classic video game cartridge box.

Godzilla, the most famous kaiju in the world, in action figure form! This version is from Godzilla vs Biollante (1989). The figure measures 6-inches tall and 12-inches long from head to tail. It features over 30 points of articulation, including an articulated tail!

From the deep, a line of Gallery PVC statues rises! The first offering features Godzilla in Godzilla vs. King Ghidorah (1991), and measures approximately 10-inches tall. Connect it with King Ghidorah (sold separately), to form a larger diorama! Designed by Joe Allard, sculpted by Jorge Santos Souza.

X-Plus and master sculptor Yuji Sakai team up again to bring you another fantastic Godzilla vinyl figure! Based on the Godzilla vs. Mothra (1992) (aka Godzilla and Mothra: The Battle for Earth), this terrific Vinyl Figure – Previews Exclusive beautifully captures Godzilla’s classic look.

Based on Godzilla vs. Mechagodzilla II (1993), this Gallery Statue kicks things off with the big guy himself! Measuring approximately 11-inches tall, this sculpture of Godzilla from 1993 is crafted of high-quality plastic and features detailed sculpting and paint details.

There are many versions of Burning Godzilla toys but this one is from Godzilla vs. Destoroyah (1995). The action figure stands over 6-inches tall, with a head-to-tail measurement of over 12-inches long. Burning Godzilla features incredible “burning” details, a bendable tail and nearly 30 points of articulation!

NEXT PAGE: MILLENIUM AND MONSTERVERSE TOYS