We will skip over the 1998 TriStar Pictures Godzilla and go directly to the monster that appears in Godzilla 2000. This is the first incarnation of Godzilla that appears in the Millenium series and it’s the fifth incarnation of the character overall. This Godzilla has a darker green skin as opposed to his classic gray color. Godzilla features a realistic full-bodied form and sharp dorsal spikes that have been faithfully recreated while maintaining the perfect balance between cuteness and its awesomeness! This Shonen RIC exclusive edition comes with a swappable lower jaw and boat to let you recreate the unforgettable scene from the film where Godzilla clutches a boat in his fearsome jaws!

This version is the seventh incarnation of the monster and is based on Godzilla’s Atomic Blast attack in the 2001 movie Godzilla, Mothra, and King Ghidorah: Giant Monsters All-Out Attack, a spectacular battle between Godzilla and some of his most famous foes. It features a removable Atomic Blast effect, awesome paint deco, and over 30 points of articulation, including an articulated tail. Ages 14 and up.

It’s Godzilla vs. Mechagodzilla (2002)! Sculpted by Yuji Sakai, this Godzilla features a more reptilian head like the first several incarnations of the Millennium series and has more jagged dorsal fins. The distinctive neck is accurately rendered, and the poseability even lets you replicate his appearance in the opening scene of the movie. Articulated parts let you pose the head tilted upward as well.

The second American version (also known as the MonsterVerse Godzilla) and tenth incarnation of the character. This form of the King is much broader than many previous versions. His face is rugged and square and he has a wide neck and gills. Even though the dorsal fins are small, they still have the classic maple leaf shape. Over 25 points of articulation are featured on this fantastic figure, including a bendable tail – plus, this great figure even makes sound effects from the film!

Shin is the eleventh and tallest incarnation of the famous kaiju. This figure is based on the fourth form of Godzilla as seen during the freeze-attack scene in the hit movie Shin Godzilla (2016)! Colored to replicate Godzilla’s appearance after being injected with blood-thickener. This is one of the best Shin Godzilla toys to add your SH MonsterArts line. 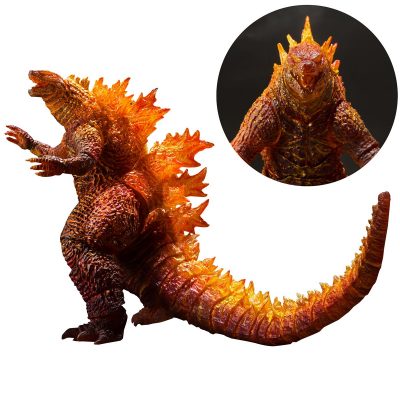 Continuing on with the MonsterVerse Godzilla. Burning Godzilla, which appeared in the climax scene of Godzilla: King of the Monsters (2019) finally joins the SH MonsterArts series! We’ve seen other Buring Forms of Godzilla in the past but this is the first time it appears in the American version of the King of Monsters.

Check out the latest Godzilla Collectibles on Entertainment Earth now!