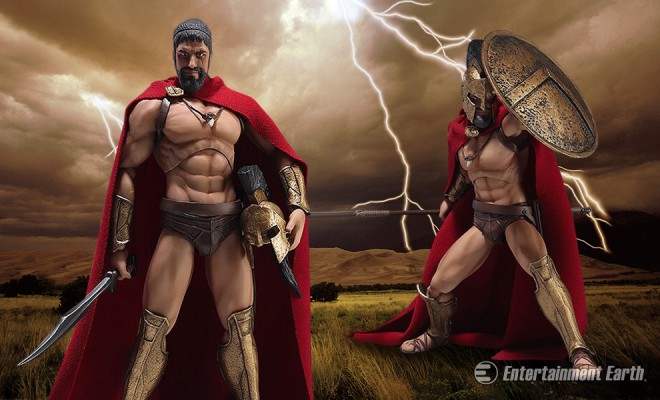 In the year 480 BC, an army of over 100,000 battle-hardened men marched towards Greece with a mind to throw over the collection of city-states. This army came upon King Leonidas and his 300-man army of Spartans who declared like Gandalf that the much larger Persian army shall not pass. The bravery displayed in standing up for their homeland over three days of battle, facing certain defeat, is chronicled in the blockbuster movie, 300.

Now you can own part of this action with this 300 Leonidas Figma Action Figure. This figure stands about five-inches tall and comes with enough props and possibility for all 300 of his men. He has interchangeable heads, so you can catch his cold glare or his battle cry with equal intensity. He is overloaded with points of articulation and balanced for perfect posing in a variety of ways. His shield, spear, and sword are highly detailed recreations from the film itself. His cape and helmet are both removable, and the cape is made of real cloth.

Looking at your display shelf, with a few minor adjustments, anyone would think they weren’t looking at the same figure twice – there are that many ways to display Leonidas. This is the kind of figure that is so meticulous and versatile that you can hardly believe your eyes. You can pre-order yours today with free shipping at EntertainmentEarth.com!