Nendoroid Captain America Is the Captain of Cute

Nendoroid figures are super adorable and super poseable, but few of them also look super determined about saving the world. Not so with the new Nendoroid Captain America: Hero’s Edition from the Good Smile Company.

The figure is Captain America in his Avengers: Age of Ultron costume, replicated down to the tiniest details on a chibi scale. His shield allows for an even greater array of poses, as it can be held in either of his hands, clipped to his back, or even posed in mid-air with effect parts included to attach to the display stand.

As well as his shield, the First Avenger comes packaged with a display stand that matches up to the stand included in the Iron Man Mark 45 Nendoroid released at the end of last year. The stands can be joined to display Iron Man and Captain America side-by-side and ready to face off against Ultron.

With the release of Captain America: Civil War, I have no doubt that this is going to be a super popular collectible. At this stage the Good Smile Company has him slated for release in October of this year, and we will bring you more details as they’re released.

Uninitiated to the adorable world of Nendoroid? You can check out our Nendoroid collection at Entertainment Earth now! 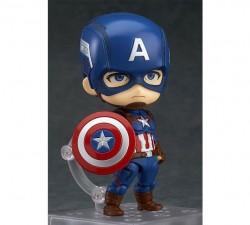