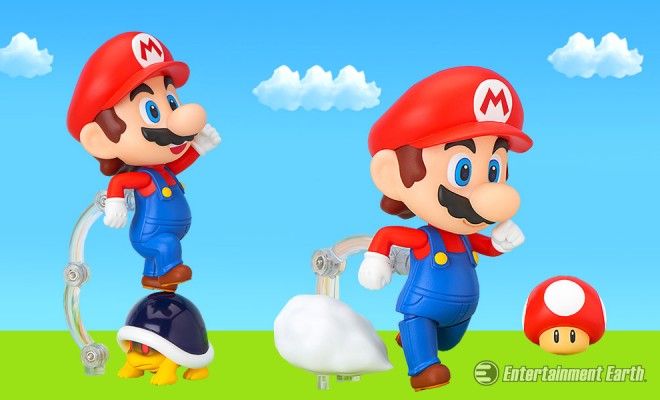 Never has a mustachioed plumber ever been so cute! This Super Mario Bros. 4-Inch Mario Nendoroid Action Figure is simply the most versatile and exciting way that we’ve ever seen to display the excitement and legacy of Mario. At over 30 years old, many collectors have had some version of Mario with them all their lives. His exploits and adventures are funny, challenging, and exhilarating. Finally there is a way to capture all of the excitement in one figure.

Mario fans and Nintendo fans likely have more than a few Marios hanging around their house already. But this isn’t your typical Mario toy, and you won’t find it just anywhere. It is a specialized figure that opens a whole world of display options and perfectly captures the character that is Mario.

This Nendoroid figure comes with all the bells and whistles. An action stand lets you pose Mario in any position, even soaring through the air. The included warp pipe, Buzzy Beetle, power-up mushroom, and cloud allow for endless scenarios. And most amazingly, it comes with interchangeable faces, arms, and legs!

Collectors can combine the 4-Inch Mario Nendoroid figure with the 4-Inch Luigi Nendoroid to find even more options. Together, the Super Mario Bros. are unstoppable. While Bowser turns the citizenry of the Mushroom Kingdom against each other and plunges the world into chaos, only the Super Mario Bros. can make things right again. Show them how super those brothers are with this amazing figure. Order yours today at Entertainment Earth!