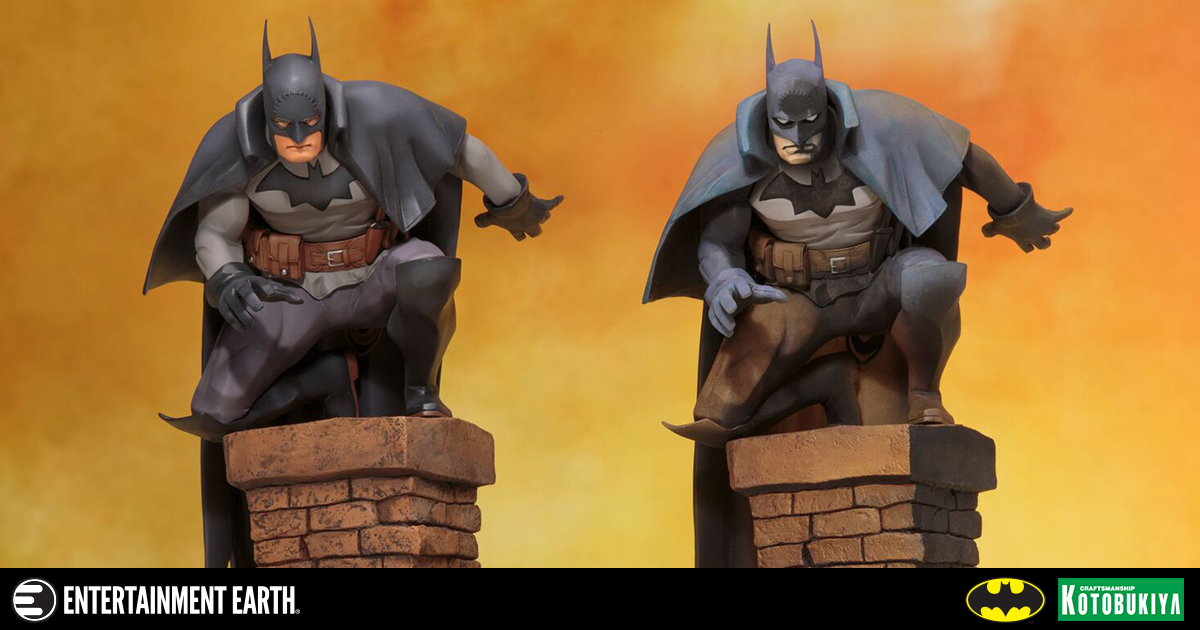 In the late 1980s, DC Comics put out a series called Elseworlds, which showcased alternate realities of DC superheroes. The first of these stories highlighted artist Mike Mignola’s rendition of Batman fighting Jack the Ripper in 19th century Gotham. It is a one-shot storyline paying homage to the famed English detective, Sherlock Holmes, called Gotham by Gaslight. Mignola’s cover art for this story truly paints a picture of the story’s tone the minute you lay eyes on it. Being such a huge influence throughout the years on other Batman comics, I’m happy to see that this has become the inspiration for a new ArtFX+ statue from Kotobukiya. The new Batman Gotham by Gaslight statue encapsulates some amazing details along with the feel of Mignola’s art piece.

What first jumped out at me with this beautiful statue was how much it looks like a piece of art itself. The paint job brings to life Mignola’s brushstrokes and muted color choices. Considering Batman is perched atop a chimney stack it makes sense and sets a tone for the backstory. This is emphasized by his Victorian-era style costume details. He’s wearing a brown distressed utility belt and knee-high worn boots. A double-layered cape that features a pronounced collar completes the look and frames his face. In my opinion, this is the highlight of this statue especially since he comes with two interchangeable heads.

Both heads showcase long pointed ears and stitching details on the front of the cowls helping to create the look as if it were leather. It is a nice detail and gives a realistic touch to both faces. One features a white-eyed brooding look and the other has a much more realistic feel because his eyes are completely visible. The realistic head is my favorite, with its penetrating eyes and what I would probably choose to display him with if you ask me.

All of these details on Batman himself are incredibly impressive but what helps to amplify this statue is the base he is perched on top of. It’s made to look like a crooked brick chimney stack surrounded by rocks and bent iron railings. Its paint job using grays and browns create a shadowed effect no matter what angle its being looked at from. Truly it brings the entire statue together creating an impactful addition to any collection.

Overall this 1:10 scale Batman Gotham by Gaslight statue is stunning standing about 12 3/5-inches tall from its base to the tip of those pointed ears. It is the first vignette-style statue in the ArtFX+ series from Kotobukiya called “artist edition,” and what an amazing first piece it is. It will be released in August 2018 and is up for pre-order now. Make sure to put in your order before this rarely seen Victorian era style Batman becomes history too!