Own a Piece of Pop-Culture Nostalgia Trapped in Time

A few miles south of the entrance to Grand Canyon National Park, there lies a theme park and campground that is a true relic of the golden age of television, a relic of the age of the American Road Trip, and relic of the Stone Age. With videos of Fred and Barney playing on repeat, five-cent coffee in the diner, and pterodactyls nesting in active volcanoes, Flintstones Bedrock City is a theme park and campground that takes the nostalgia game to a whole new level. And all of this, along with the 30-acres of surrounding land, can be yours for the low price of $2 million.

I was first taken with the glory of Bedrock City when I was 15 years old, on a family road trip to the Grand Canyon for the first time. At the time, the place looked run-down to the point of seeming like an abandoned fossil of a bygone era. Yet, behind the wall, near the plaster dinosaurs and stone houses, people had set up tents and were spending the night in a living cartoon. I was fascinated, both as a long time fan of The Flintstones, and as someone who enjoyed strange and bizarre roadside attractions. 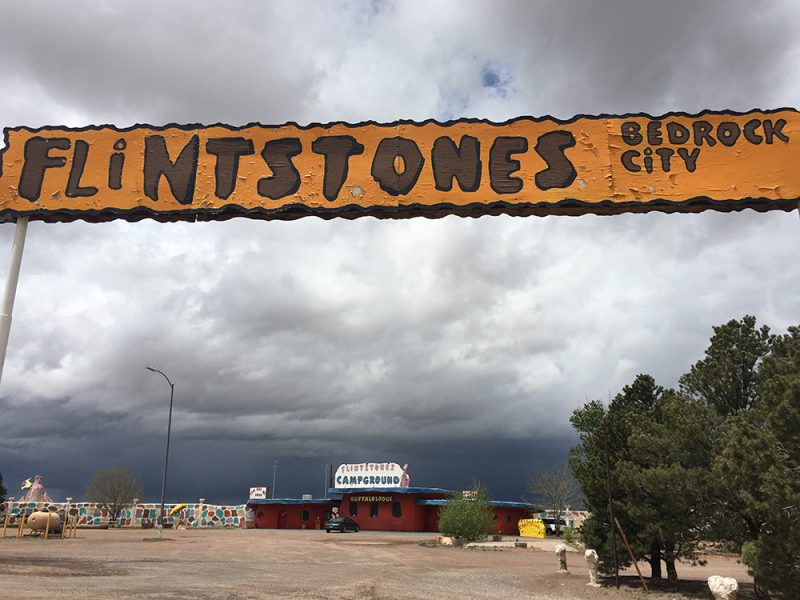 Years later, while on my honeymoon trip across the country, I told my new wife about the place, speaking of it entirely in the past-tense. I was certain that the place, looking abandoned as it did ten years before, had to be completely torn to the ground by then. Yet, there it stood, exactly as I had remembered it, more glorious in kitsch than any other roadside attraction we would see on our five week drive around the country.

And just recently, my wife and I took our four daughters to stare down the abyss of the Grand Canyon and we saw it again. If anything, the 20 years between my very first visit and my most recent have been kind to Bedrock City. Maybe the owners have slapped on a fresh coat of paint, or maybe it has undergone a more extensive refurbishment, but I tell you, the place looked great. The most surprising change of all, though, was the addition of a new sign: “For Sale.”

During the 1950s, the American Road Trip was born. This was fueled by not just a greater access to road travel and lodging, but by television. Disneyland opened in 1955, and was one of the greatest contributors to road fever, and was funded in part by a television show of the same name, promoting the upcoming park coast-to-coast. The television show, Route 66, premiered in 1960, displaying the glory of hitting the road to see the sights along America’s Main Street. The same year saw the first ever primetime television cartoon, The Flintstones.

Hanna-Barbera hit paydirt with The Flintstones. Basically an animated, stone-aged Honeymooners, it was the first time that American families were sitting down in the evenings to watch a cartoon together. My mom always told me the story about how, when Pebbles was born, stores closed and church meetings were canceled so that everyone could witness the groundbreaking event with each other at home.

Bedrock City captures all of this in one package. From Fred’s Diner, to the Buffalo Lodge, to Wilma’s Laundromat, you just can’t get a better picture of the 1960s in 2016 than this unique place. Huge sculptures of Flintstones cars, houses, and dinosaurs litter the park and the campground. Children can pose with the characters and everyone can laze about and watch a continuous stream of reruns play in the theater.

In various other places across the country, I have come across Yogi Bear’s Camp Jellystone Park and Campgrounds, usually near famous wilderness parks. While those Hanna-Barbera themed attractions are lots of fun, none of them capture the alternate-world atmosphere that Bedrock City creates. This has to do with the fact that Yogi Bear lives out in the woods, while The Flintstones occupy an alternate reality where post-war culture and technology exists in an idealized stone age. But it also has to do with the unique vision that the founders had of a roadside attraction that is so much more.

Roadside attractions, from Carhenge to The House on the Rock to The Winchester Mystery House to Touchdown Jesus all give us a great view of what The American Road Trip is all about: stepping outside your door and experiencing a new and exciting world. But what Bedrock City does is so much more: it shows the vision of an optimistic America bygone, through the aesthetic of a low-budget tourist trap that exemplifies that age.

And now, that true slice of American culture can be yours. It is a successful, bustling attraction near one of the world’s most amazing locations. Now, let me ask you, does $2,000,000 sound like that much anymore?