The Blurred Lines of Good vs. Evil: 5 Greatest Batman Rogues

One of the reasons why the Caped Crusader has thrived for almost 8 decades in comic books is because of his unique and extensive rogues gallery. Each of Batman’s villains has shaped him into the hero he represents, but what’s most fascinating is their presence within his universe – continually to evolve the already complex notion of “good vs. evil.” You can’t celebrate the Bat without the rogues, so we’re spotlighting 5 of the Dark Knight’s greatest adversaries and some of their best collectibles, which every Batman fan should include in their Batcave. 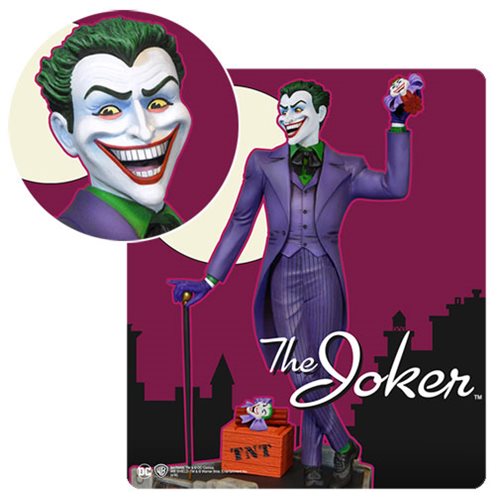 The Joker, considered Batman’s greatest enemy, was created by Bob Kane, Bill Finger and Jerry Robinson in Batman Vol. 1 #1 from spring of 1940. This serial killing, evil court jester became a regular in Batman’s reoccurring villains alongside Catwoman, The Penguin and Two-Face. Shrouded with mystery since his sinister beginnings, the Clown Prince of Crime’s most popular origin story debuted in Finger’s The Man Behind the Red Hood (Detective Comics Vol. 1 #168, February 1951) and given a dark, modern twist in Alan Moore’s Batman: The Killing Joke. Portrayed as a gangster in Gotham’s criminal underworld, and dressed up as the Red Hood, The Joker falls into a vat of chemicals in a playing card factory and emerges with green hair, pale white skin and ruby lips highlighting a terrifying grin. To match his new look, the man decides to name him after the place that created him. Deranged and psychotic, The Joker would cause mayhem and madness wherever he goes, terrorizing both the people of Gotham and the Batman’s psyche. Although the Batman and Joker over the last several decades showcase the true nature of good versus evil, they both demonstrate being mirror images of one another, the result from handling each of their respected “bad days” differently. As Bruce Wayne took the tragedy of his parents’ murder to mean avenging them as the shadow of the Bat, The Joker decides to prove that insanity is what makes up the world around us and is deep down inside of every individual. The Joker has evolved over the past 75 plus years, across all media, played by many talented actors capturing a Harlequin of Hate for each era, from the campy style of Cesar Romero to the dark anarchist in Heath Ledger’s award-winning performance. Whatever version of this villain makes you question your own take on good vs. evil, Batman and Joker’s yin and yang dynamic doesn’t have an end in sight and represents one of the best rivalries in comic book history.

Introduced as the first femme fatale in the Dark Knight’s long history, Selina Kyle (AKA Catwoman) debuted as “The Cat” in Bob Kane and Bill Finger’s Batman Vol.1 #1. Evolving from her humble beginnings as a whip-cracking jewel thief, Catwoman’s origin has changed throughout her history, from being a flight attendant to a battered wife to a dominatrix. No matter what beginning creators give her, The Cat would sway back and forth on the hero/villain spectrum, in particular, due to her feelings for the Caped Crusader. Both brilliant representations of creatures of the night, the Bat and the Cat wrestle with the idea of being an item, their love affair highlighted in arcs such as Jeph Loeb and Tim Sale’s Batman: The Long Halloween to Loeb and Jim Lee’s Batman: Hush. Due to trust issues and Bruce’s own dilemma of choosing his heart over the cape and the cowl, his relationship with Catwoman doesn’t go past a sexual rendezvous here and there. Besides this fan favorite shipping, Catwoman stands as a fierce female character in any visual media she enters. From becoming a household name after Julie Newmar’s performance in 1966’s television series Batman to entering the Gothic Burtonverse in the 1992 film Batman Returns starring Michelle Pfeiffer to Christopher Nolan’s final film The Dark Knight Rises with Anne Hathaway, Catwoman’s role in the DC Universe as the anti-hero makes her appearances within the Batman’s life even more complicated but all the more alluring.

The theme of the sympathetic rogue remains constant in Batman’s mythology more so because the audience sees Bruce Wayne as a sympathetic character due to the mental pain he suffers after the death of his parents. As Bruce sees the Batman persona as a saving grace, he consistently tries to save many villains he encounters from their own troubled paths. One such rogue is another Bob Kane and Bill Finger creation, Harvey Kent, which would change to Harvey Dent, debuting in Detective Comics #66 from August 1942. Originally conceived as a gimmick crook, it wasn’t until his reinvention in the 1970s by Neal Adams and Dennis O’Neil that Harvey Dent’s character – inspired by Dr. Jeckyll and Mr. Hyde – would evolve into the complex man seen in television, film, and video games. In his first modern origin story by Andrew Helfer in Batman Annual Vol.1 #14, District Attorney and Bruce Wayne’s friend Harvey Dent’s bipolar disorder begins to creep to the surface after visiting his abusive father in a senior home. After his father gives Harvey a two-headed coin, a tragic accident happens when crime boss Maroni splashes acid on Harvey’s face in court, resulting in one side of his face badly scarred. This disfiguration results in Harvey’s paranoia and bipolar disorder to fully bloom, transforming him into becoming the villain Two-Face. Using his father’s coin, he manually scars once side and utilizes it to make decisions for him. When he decides, for his family sake, to try and reform back into the good man he used to be, Harvey believes that fate has chosen this path for him and there is no turning back from the duality his life now represents. In many DC Comics media, Bruce tries to save Harvey from the monster he has become knowing deep down he is honest and good, from the classic two-parter “Two-Face” in Batman: The Animated Series to Aaron Eckhart’s portrayal as the D.A. in Christopher Nolan’s The Dark Knight. The end result eventually comes down to Harvey and his coin what fate has in store for the villain (and no one, not even the Batman can change that).

One of the most noteworthy transformations of a Batman villain comes in the form of Bob Kane and Sheldon Moldoff’s character Mr. Freeze. Debuting as Mr. Zero in Batman #121 (1959), and then Mr. Freeze in Detective Comics #373 (1968), experimental scientist Victor Fries was nothing more than a gimmick character with an ice gun and a need of a subzero climate to survive. It wasn’t until Paul Dini and Bruce Timm’s award-winning television episode “Heart of Ice” on Batman: The Animated Series that this once obscure character become the popular villain many fans know today. Chillingly voiced by Michael Ansara, we are reintroduced to scientist Victor Fries who now has a vendetta against Gothcorp’s CEO Ferris Boyle who made Victor’s wife, Nora, terminally ill. Seeking revenge against Boyle. Victor Fries now calling himself Mr. Freeze is committing crimes around Gotham, piecing together a weapon to not only take out Boyle but can cause harm to other Gothamites in his way. Batman has to stop Mr. Freeze before innocent people’s lives come to an icy end. As Batman learns of the tragedy that has befallen Victor Fries and his beloved wife, he aches for Victor’s loss of family as he does for his own, only wanting to help him go back to being a brilliant scientist. Since Victor’s heart has frozen over, all he wants is revenge, not willing to turn back to the side of good. This tragic origin story melted into the future of Mr. Freeze in comics and other media, from arcs like Dini’s Batman: Mr. Freeze (1997) and J. H. Williams III’s Batman: Snow (2007) to providing inspiration for Arnold Schwarzenegger’s portrayal of Freeze in Joel Schumacher’s 1997 film Batman & Robin. Mr. Freeze remains one of the best examples of the sympathetic rogue that will forever instill the idea that revenge is a dish best served cold.

Harley Quinn is a character whose popularity continues to skyrocket. Ever since her creation by Paul Dini and Bruce Timm and debuted in the Batman: The Animated Series episode “Joker’s Favor.” Joker’s new female sidekick quickly jumped to the comic book medium, first in Batman Adventures Vol.1 #12 (1992). Dini and Timm formed her origin story in The Batman Adventures: Mad Love in February 1994. She began as a brilliant psychiatrist, Dr. Harleen Quinzel at Arkham Asylum. But her story quickly devolves when she takes on a new patient, The Joker, and falls madly in love with him. Believing that his issues are due to the treatment he receives from the Batman. To show her puddin’ her true feelings, Harleen busts Joker out of Arkham and transforms to Harley Quinn, taking on a new life of crime. Since then, Harley Quinn has appeared Batman comic books such as the 1999 saga Batman: No Man’s Land and in Dini’s graphic novel Batman: Harley Quinn. While this chaotic cutie seemed to be simply a woman head over heels in love, Harley Quinn in comic book form evolved into a femme fatale with many layers to her persona, as illustrated in her first self-titled publication by Terry Dodson in the early 2000s. Often manipulated by the Clown Prince of Crime, Harley still sees the fun in running the streets of Gotham, whether with her best friend Poison Ivy or solo, many times in comics Harley has wanted to reform and seek help in Arkham, knowing this isn’t a healthy lifestyle. Even the Dark Knight knows the wide-eyed psychiatrist Harleen is still somewhere inside and attempts to help her return to normalcy. Harley, however, always reverts back to the thrill of being the Clown Princess of Crime, joining teams from the Secret Six to Gotham City Sirens to the Suicide Squad both in comics and live action cinema portrayed by Margot Robbie. With her several comic books running today (such as Harley Quinn and Harley’s Little Black Book), her appearances in animated film and television, and prominent role within video game franchises, Harley Quinn will easily have another 25 years under her belt, but whether it is as Harley or Harleen, only time will tell.

“I always claimed I became the Batman to fight crime. That was a lie. I did it to overcome the fear.” – Batman (Batman: The Cult, Jim Starlin, 1988)

Batman’s 78 years in DC Comics has showcased amazing stories with even more amazing villains because his rotating rogues gallery doesn’t just consist of petty crooks hiding in the grim streets of Gotham. Each has a three-dimensional design that captivates the reader to learn more about where they come from and why they lead a life of crime. As these villains struggle with their own morality, the Batman constantly struggles himself, determining if his path of vigilantism is the work for the good of the innocent or the selfish guise of combating his own evil demons. There will always be a fight between good and evil in Batman’s mythology, but it will never be as simple as black and white.

This is a guest article by Londyn Johnson, creator of “History of the Batman,” which relives the defining moments of one of the most iconic figures in comic book art and literature, the Batman, through a fun and educational look at the DC Comics character over the last 77 years and spanning over all visual media.