The Greatest SDCC Item Ever!

Yup, I said that. Pretty bold claim, isn’t it? And one I would not make without 100% confidence.

Every year, toy companies bring out the best and coolest items they can create for that once-a-year Super Bowl of conventions – San Diego Comic-Con.

But here at Entertainment Earth, we were determined to go one step further. We didn’t want to make just another SDCC item. We set forth a year ago to create the GREATEST SDCC ITEM in the history of the toy multiverse.

What are Pin Mates™? They’re the perfect toy. Wooden collectibles modeled 1:1 after vintage Pin Play™ toys, but with today’s hottest brands and licenses.

Now, while Pin Mates™ have been out for two years and many collectors have started an amazing collection, in fall 2018 we’re relaunching the line, expanding it from a collector-only brand to one for the entire family. Literally, a toy that will appeal to kids, collectors, and parents. All-new packaging; all-new numbering; and clear RED, SILVER, and GOLD series to follow and collect.

And because we know many of you are just starting your Pin Mates™ collection, we went the extra mile to create this year’s incredible SDCC item.

Voilà! An instant Pin Mates™ collection right out of the box!

The Infinity Gauntlet (1991) is the story that inspired this summer’s (and next summer’s) blockbuster Avengers films, and the team at Entertainment Earth has worked with our partners at Marvel to create the ultimate tribute to this legendary Marvel story.

Featuring virtually every Marvel hero from the original comic, our 16-piece Gold Series (convention grade) Pin Mates™ set brings the classic story to life through deluxe window-box packaging. On the front, the heroes are shown in their courageous charge from Issue 3, while villainous Thanos is packed out on the reverse in a window panel recreating his infamous “Come and get me!” taunt from the cover of Issue 4.

Because the original The Infinity Gauntlet storyline features almost all the characters across the Marvel Universe, we wanted to complete the Pin Mates™ set as much as humanly possible. So…

…in addition to the 16 awesome Pin Mates™ in the Infinity Gauntlet Box Set, we’re also offering a “Marvel’s Mutants” 3-pack featuring Cyclops, Wolverine, and Scarlet Witch in their 1991 outfits seen in the comic. Our wonderful partners at Marvel helped us create an inclusive set by letting us put three empty blister spots in the Infinity Gauntlet Box Set package so you, the toy collector, could pop the three Mutants into the main set and display the package completed filled! 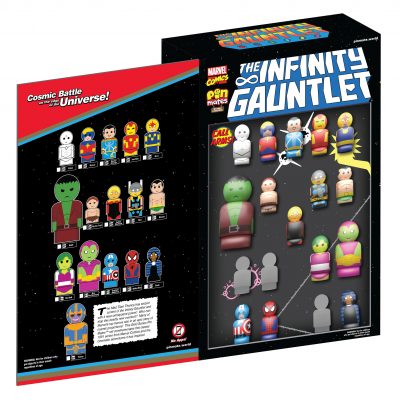 We said we wanted to create the greatest SDCC item ever, right? Well, it wouldn’t be fair to attempt that without adding something truly extra-special for those fans who make it to SDCC in person.

So, in addition to the amazing Infinity Gauntlet Pin Mates™ Set of 16 and the accompanying Marvel Mutants Pin Mates™ Set of 3 – EXCLUSIVELY ONLY AT SDCC 2018 – is the 20th single-carded Gold Series Nebula Pin Mate™!

(Spoiler alert) The secret twist ending can be recreated with our spectacular Nebula. She’s a double-sided Pin Mate™ showing her burned on one side and restored with the Infinity Gauntlet on her hand on the reverse!

Fans at the show can CHOOSE one of two versions of Nebula as a free gift with purchase! When you buy the Infinity Gauntlet Box Set bundled with the Marvel Mutants Set, you get to pick which single-carded Nebula Pin Mate™ you want – carded burned, or carded restored! It’s the same double-sided Pin Mate™ on both cards, but one version is packed out burned and the other version is packed out restored, with original card art on both.

If you’re already a Pin Mates™ collector, here’s your chance to add an amazing number of original Marvel Pin Mates™ to your expanding collection.

None of the Pin Mates™ in these Gold Series sets will ever be offered again, and the sets will not go into a second run. Once they’re gone, they’re gone.

If you’re not already a Pin Mates™ collector, now’s the time to get in on the ground floor of what is destined to be the greatest collectible toy line ever.

This is an instant collection featuring a virtual who’s who of the Marvel Universe, and some of them (like our Pip the Troll Pin Mate™) are the FIRST-EVER toy of this Marvel character in his classic look!

Pin Mates™ are an amazing toy and one that’s truly a healthier choice for children. (see here) No dopamine-dispensing apps and no virtual mindless staring at screens. Good old-fashioned imagination-based play and “I have more than you” collecting. It couldn’t be better!

Pin Mates™. No apps, no electronics, and no assembly. Designed by parents and approved by collectors. Start your collection today, because we’re in this for the long haul.

The greatest SDCC set will be available at the Entertainment Earth booth #2343, starting Wednesday night.

Remember, Nebula is ONLY available at the show while supplies last. So, be there early to get your sets!

Entertainment
Related Items
← Previous Story Toys Without Apps – Play Like You Remember!
Next Story → Pin Mates™ – Playtime Is Back!