Destro Rings Will Add Strength and Authority to Your Fist 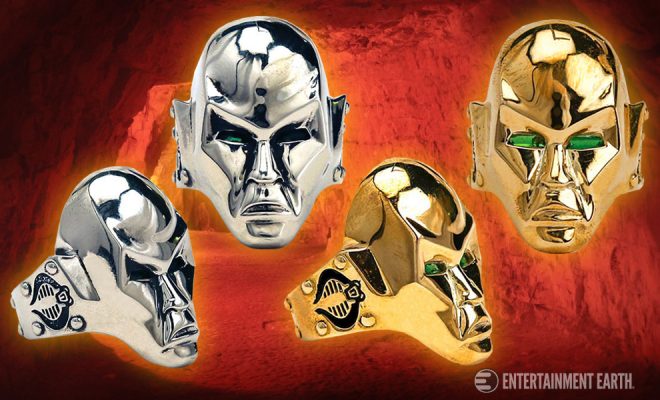 Seen as both Cobra Commander’s underling and his equal, Destro was one of the most arresting characters of the golden age of G.I. Joe. His trademark silver head masked more than his face – it masked his true intentions as part of the terrorist organization, Cobra. Was he there to serve the Commander? Or were his true intentions to take power on his own? The flexibility of his character made for endless plot twists and character arcs, adding a shade of gray to the black-and-white Cold War-era politics of G.I. Joe.

Han Cholo has come up with the perfect way to capture the excitement and nostalgia of Destro for those of us who don’t want to just play with toys. This G.I. Joe Destro Ring shows the infamous face and all of the anger and determination of the villain. The shiny head makes the perfect ring for any hand, made from high-quality .925 sterling silver.

But later in the G.I. Joe series, Destro no longer had the same silver look. In his new incarnation, leading his own band of terrorists, Destro had his head plated in gold. You can capture his updated look with this Gold G.I. Joe Destro Ring. It is made out of the same cast and from the same high-quality silver, but with a 14K gold vermeil plating!

In either form, Destro lived up to his name as a destroyer of his enemies. Han Cholo, designer of badass jewelry for badass people has done a tremendous job of making this character the perfect accessory for any collector. Pre-order yours today at Entertainment Earth!

Collectibles
Related ItemsDestroG.I. JoeHan CholoJewelry
← Previous Story It Might Be Warming Up Outside, But Everything’s Frosty from Where We Stand
Next Story → Tekken’s Jaguar-Masked King Is Ready for All Comers