Han Cholo’s Tribute to “Our Monster”

“This is our monster,” writes Susan Tyler Hitchcock:

It’s true: No face haunts not only world horror but also popular culture like the face of Frankenstein’s monster.

And no version of that face continues to compel attention like movie makeup master Jack Pierce’s version, brought to life so perfectly by Boris Karloff in director James Whale’s Frankenstein (1931).

The flat head, the sunken cheeks (created, in part, by removing Karloff’s own dentures), the scarred forehead, the neck bolts, and most of all those dull, deep-set eyes… Pierce and Karloff’s Creature seized the public’s imagination. Eighty-six years later, he shows no signs of loosening his grip.

We’re thrilled to offer this beautifully detailed sterling silver ring from Han Cholo, a fitting tribute to one of cinema’s most famous and most frightening faces.

Officially licensed by Universal, packaged in a striking window display box, and engraved with the Frankenstein name on the inner band, this gorgeous, intricately crafted ring is sure to spark conversations, and mark you as one of the Monster’s major fans.

Make “our monster” yours by ordering your Universal Monsters Frankenstein Sterling Ring today! 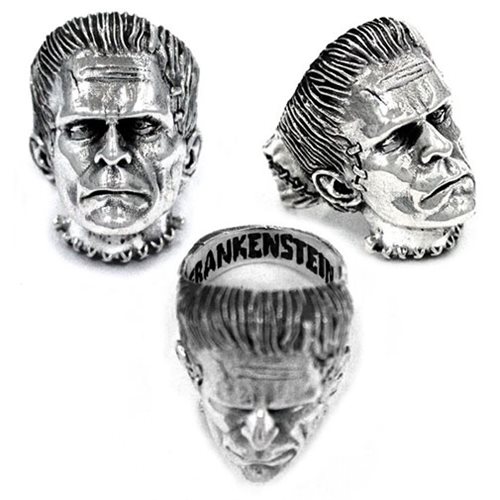