Batman and Robin Have Nothing on This Galactic Duo 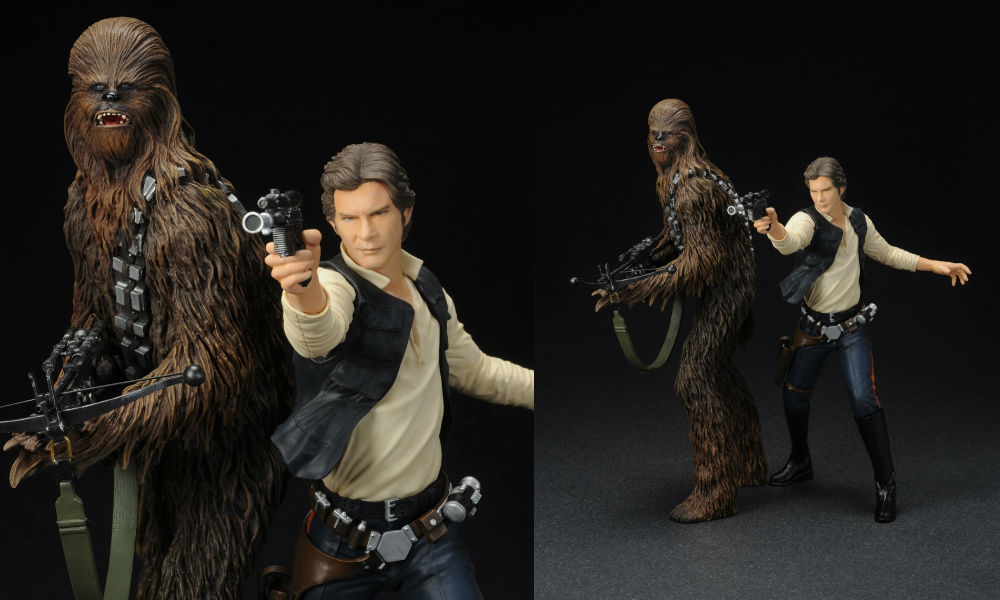 These insufferable and inseparable space scoundrels never know when to quit, do they? From Kotobukiya come the Han Solo and Chewbacca ArtFX+ Statues! The duo come as individual statues but are packaged together, just the way they like it.

Based on their designs from Star Wars: Episode IV – A New Hope, the statues are posed for battle, ready to take on the Galactic Empire alongside their friends Luke and Leia! They’ll guard your collection and add a level of intergalactic cool.

The infamous and swaggering Han Solo, hailing from Corellia, stands just over 7-inches tall. He’s wonderfully painted and designed in his iconic outfit consisting of a white shirt, navy vest, orange-striped blue pants, belt with holster, and tall black boots. He’s brandishing his most faithful weapon, a BlasTech Industries DL-44 heavy blaster pistol. After all, “hokey religions and ancient weapons are no match for a good blaster at your side, kid.”

His best friend, the fearsome Wookie Chewbacca, is recognizable wearing nothing but his bandolier and thick brown fur. Chewie stands just over 8-inches tall, pointing his crossbow at any Stormtrooper who might cross his path.

The Kotobukiya ArtFX+ statues are pre-painted and fun-to-assemble snap-fit plastic kits. Both statues feature magnets in their feet for extra stability and are crafted in 1:10 scale.

Some of the most famous movie characters of all time, and the best of friends in the galaxy, the Han Solo and Chewbacca ArtFX+ statues are currently available at Entertainment Earth with free shipping.